IT People Blog – In this article I will give tips and tutorials about youtube content, surely you often see big youtubers and you think you want to be like them, whether it’s to make your parents happy or prove to your ex that you can be successful, hehe a little joke can you? 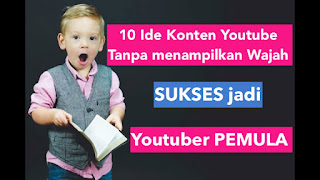 Maybe it’s because of this that you decided to become a youtuber so that you can be famous and known, earn money and have lots of fans. Because as we know income from YouTube is very promising, if we are serious about being a content creator.

But the main problem is that many of you don’t feel confident talking in front of the camera, or are embarrassed if you have to show your face in YouTube videos. Now to answer all these problems, brother, I have prepared YouTube content ideas for beginners without showing your face, just really suitable for those of you who are beginners and shy.

The content that I will discuss this time is not only for the State of Indonesia, you know, but this is also suitable for those of you who want to attract views from foreign countries, and of course becoming a successful YouTuber without showing your face is not just a dream anymore, because for now there are lots of YouTubers. who have proven this, starting from Indonesian YouTubers and foreign YouTubers. I hope this article can help you to work on YouTube or become a professional YouTuber. So, here are the contents.

Youtube content without showing a face, what my brother recommends first is a film review, this content only contains your voice that retells the film you have watched and of course goes through a little editing to avoid copyright.

This film review content is very much in demand by youtube viewers today, because during the pandemic there are many people who are looking for entertainment, of course people prefer to watch film reviews that are only about 15 minutes long rather than having to watch the original film which is very long.

To create film review content, you must first understand values ​​and creative commons, so keep in mind if you want to make a film review that you take from the original film, don’t let it take more than 3 seconds, so you take the part of the trailer that you think is interesting. just then dub with your voice.

The tip is, please watch on YouTube, channels that have created content such as film reviews, for example IQ7, Bang Juned or many others, then you learn how they can escape copyright.

For the income from this film review content, you can give an example from a bigger channel, such as the IQ 7 channel, from the data you see, the IQ7 channel can generate up to Rp. 233,425,500 million and according to you, this is really crazy, because just reviewing a movie this channel can generate hundreds of millions of rupiah. So how about after seeing the income, are you interested in making it?

For the second idea, this is the content of playing mobile legends games, Sis, how come I’m not good at playing the game yet? Shame on you, Sis, with the pro players out there who are better?

Don’t worry, this game play content doesn’t have to show your gameplay, you can use game play from pro player to edit and then upload it to YouTube. Loh, can we upload someone else’s game play? Can you just calm down as long as the video has never been uploaded to YouTube, you can use this method.

How do you get the video? It’s easy, if you are a mobile legends player, of course you know that in Mobile Legends there is a history of playing, so all you have to do is take the video and then edit it as well as possible. Content like this can also generate a lot of views and subscribers, you know, because currently many people are playing mobile legends, and this is an opportunity for those of you who want to create this faceless content.

For the third content, this is origami content, how come it’s origami content, Sis? Can’t I do it? Even though you can’t, you can see the videos that are already on YouTube and you follow the steps, after that make your version of the video and upload it to YouTube, easy isn’t it?

Now for this origami content, my sister advises you to attract views from abroad, because income in Indonesia and abroad is very different. There are also many fans of origami content abroad, so all you have to do is make the title and description in English so that YouTube recommends your videos to foreign people.

The income from this origami content is around IDR 7,214,970 million per month. How small are you? Hmm, it’s really small if we compare it to the previous content, but you need to know that content like this only lasts about 2 minutes, so it’s not too difficult for you to make it. Remember, your income will increase as your subscribers and views grow. How did you become interested in creating content like this?

What is the content of comparisons? So comparison content is a video that displays data from the smallest to the largest, for example the cheapest to the most expensive car prices 202-, now content like this is very easy for you to make, easy, where is the data from, it’s hard to get, sis?

Who said, in this day and age it’s very easy for us to get information, so there’s no reason anymore.

The income is also very promising, brother, I will give an example from one of the channels on YouTube that has successfully created a channel like this. monthly income is Rp. 31,123,400 million. How are you interested??

Now for those of you who have a hobby of drawing, don’t just waste your talent, because just from drawing we can make money from YouTube, so you just draw and then you video, keep adding backsound so the video is more alive, after that upload it to youtube.

The monthly income from drawing content is IDR 11,204,424 million and will increase as views and subscribers grow. So what are you waiting for, let’s take advantage of your hobby to make money!!.

So, that was any content suitable for beginner YouTubers, especially for those of you who are embarrassed to show your face in front of the camera, remember if you are starting it don’t ever give up in the middle of the road because nothing is instant (nurpaujiana)