This year, Golang is ranked 13th in the popularity index, up from 65th in the last two years. Golang is widely used in Google’s production environment and many open source projects. Golang was created to simplify the software development process, especially for complex architectures and processes. 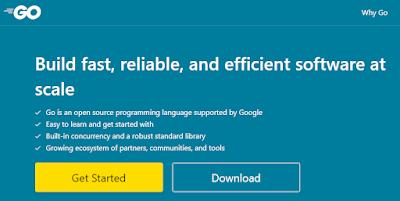 Why are programmers now moving to Golang? What are the advantages of this language made by Google?

Golang was born with the aim of having advantages in terms of speed, reliability, and simplicity.

Don’t you know? The Golang language is designed in such a way from the C language, you know. Yup, Golang is compiler-based so it produces binary code that can be compiled.

Unlike the Java programming language, which requires a Java Virtual Machine to run the program.

So, what are the advantages of this Google-made programming language?

1. According to the slogan of the website, Golang was built so that a program can be built faster, more reliable, and efficient in software scalability. In addition, this language is also open source, you know, friend!

2. Many big companies now use Golang language, such as Meta, Netflix, Google, Twitter, and many more!

3. Has a garbage collector feature. Unlike C language, in Golang we don’t need to clean up unused memory locations.

5. Overcoming high traffic. Now, with the concurrency feature, high traffic on the web can be easily resolved. This is really suitable for back-end developers who often have problems when users continue to grow.

Well, friend, that’s the reason why programmers move to the Golang language. In addition to its popularity, this language is also suitable for server-side development because it can increase efficiency so that the web that we develop becomes even better!

So Why Are Programmers Now Choosing Golang?