Why are the inhabitants of hell mostly inhabited by women? – “Having 2 daughters, can be neighbors in heaven with Rasulullah SAW”

-This requires a lot of practice and sincerity

For example, the story of a friend who wants to be next door to him in heaven, but he said that friends should increase their practice, namely increasing prostration (prayer).

-For those who have been blessed with 2 daughters, be happy, because they can be a barrier to hell fire (the content of the hadith) and can be neighbors / close to the Prophet in the highest heaven..

-Some scholars explain because:

2. Women are more easily tempted / dazzled by the world

3. Women are emotionally unstable and indeed/”bent”

4. Some people feel that boys are more reliable and have more benefits

– Therefore, if you educate a girl well, in religion, morals and knowledge and her honor until she hands over the responsibility to her husband, then the reward is very big. 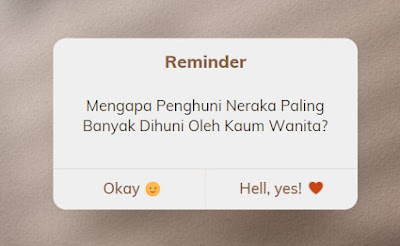 “Why don’t you ever make me happy?”

“You never pay attention to me”

So far understand the cause?

That’s right, he is the one who “Forgets / Denies the goodness of his husband or others”

It was narrated from Ibn Abbas RA that the Messenger of Allah said:

Hell was shown to me, and I saw no more terrible sight that day. I see the majority of the residents are women.â????

“O Messenger of Allah, why?”

“Because of his disbelief.”

“Because of their disbelief in Allah?”

From the above hadith, Rasulullah SAW explained the reasons why many women inhabit hell. That is, when someone makes just one mistake, then they deny/forget all the goodness of their husband/someone so far.

Even though there have been many good things that a husband or someone has done for him, but only because of one mistake, all this kindness has never been considered, as if it never existed!

I made this thread to express the restlessness of my heart & mind about this one trait that exists in women.

I’ve seen a lot of things so far, even one trait of this woman has been seen in the past, I’m sorry “Dating”. I’ve experienced it myself.

1. The woman who generalizes that all guys are just as bad. “You’re no different from other guys, you’re bad too”

Anyone, please be fair.

If he “sometimes” doesn’t understand you, then he says “sometimes”. Don’t say “You never understand me, okay?” Be careful with your words.

I’ve done a lot of good for a woman, but when I did one mistake. all the kindness that I have ever given as if never, never considered, it hurts. Hopefully useful & you guys know, to be aware to avoid this trait. Thanks!

-This is the context when you are married. If you’re dating from the word “dating” it’s clear that a boy and a girl shouldn’t actually be allowed to, from there it’s clearly a sin. But yes, his name is human, he is not free from mistakes. I also sin a lot. Astaghfirullah

-But it’s true that most of the inhabitants of hell are inhabited by women, even the ratio of men and women living in this world is mostly women, that’s why in Islam polygamy is allowed but if I don’t want to be polygamous, I can’t be the one and only husband hihi

-yes, it’s always been good, I understand this, eh, just a little mistake is immediately considered wrong and the others are never considered my kindness, hmm, that’s really bad

It’s true that most women live in hell, but if the name is still dating a man and a woman, the sin is the same.