Valorant Store Bot Discord and Music Bot Discord – Valorant is a popular first-person shooter (FPS) game. Whereas previously CS:GO was the protagonist in this field. But now it looks like Valorant has become a new icon with a huge following. Valorant is a free FPS game created by Riot Games for the Windows operating system. Similar to the concept of CS:GO, this game has two teams, five against five. The difference is in Valorant, each agent or hero has a special skill to add to the excitement of the battle.

In the game, including 24 rounds. Each team is divided into attackers and defenders. The attackers are the team tasked with placing the bombs. At the same time, it is the responsibility of the Defender to prevent this from happening. By the way, after 12 rounds, the two teams will switch roles, a unique feature of FPS Valorant Game can be seen from the Agent.

BOT to check the store on your valorant account without the need to enter the game, just log in to the discord bot, can check nightmarket, missions, points, and can set notifications when certain skins come out of your store, support 2FA, perfect for hoarding nightmarket accounts.

after invite bot, run command -setup guild on your bot server so that slash command works. 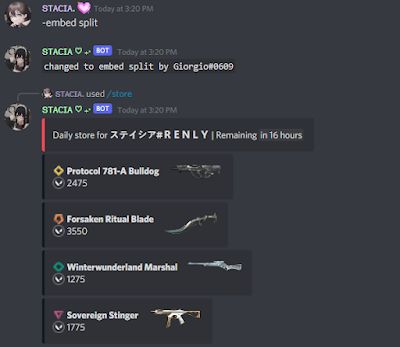 BOT is open source, not mine, here I am just the hoster for the bot, and disable the config store password.

BOT ONLY STORES YOUR VALORANT ACCOUNT TOKEN FOR STORE CHECK VIA API.

I AM NOT RESPONSIBLE IF ANYTHING HAPPENED TO YOUR ACCOUNT, USE IT AT YOUR OWN RISK.

IF YOU DON’T HAVE TO USE THE VALORANT STORE BOT I HOST, PLEASE HOST YOURSELF ON YOUR SERVER, I DON’T FORCE, I INCLUDE THE ORIGINAL GITHUB LINK.

bot running using python 3.8 and above

Put the token in config.json

All bots need admin permission to be used on all channels

The complete documentation for each bot is on their respective github, please read.

BOT to listen to music on Discord, 100% free, open source, if you use a red plate ISP, set your voice server other than Singapore, so it doesn’t break because of packet loss.

the bot runs on node, and needs Lavalink.

Please use -help to find all commands.

4. save bot tokens for later

go to folder with cd Discord-MusicBot

edit botconfig.js with token from before