The Information and Electronic Transaction Law or what we usually call the ITE Law is a law that regulates information and electronic transactions or information technology in general. This law came into force in 2008, along with the development of the technology sector that affects people’s lives.

The ITE Law has several objectives, one of which is to provide a sense of security, justice and legal certainty for users and the implementation of Information Technology. But is its function in accordance with what is happening in the field? let’s discuss further.

In fact, there are many weaknesses and shortcomings of the ITE Law that can be misused for personal or group interests. Or commonly referred to as the rubber article, or articles that are considered not to have clear benchmarks.

These rubber articles allow each individual or group to report certain parties. In this case, the most cases occur in cases of defamation or parties who provide information that is considered detrimental to certain parties. This is certainly contrary to the spirit of freedom of opinion and speech in our country.

There is an impression that the ITE Law on the one hand contains an element of protection, but it also contains threats and also causes unrest. This can be used by certain parties with higher social positions or large corporations to suppress and punish other parties because they are considered to have harmed them.

Citing data from SAFEnet, it shows that the most frequent complainants using articles of the ITE Law come from public officials, agencies or security forces, amounting to 38% of the total 285 cases during 2008-2019.

Meanwhile, the victims of the ITE Law mostly ensnared ordinary citizens or civilians. According to the author’s personal opinion, this is very vulnerable to being charged with political issues that are ridden by certain parties. How, has the ITE Law become more like a threat than a protection? 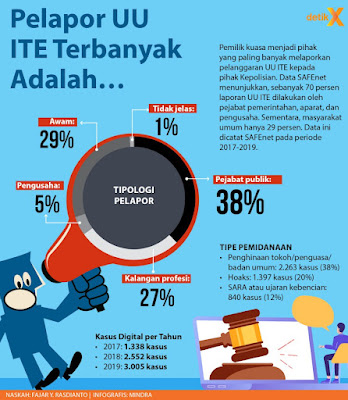 In order to assess the ITE Law more objectively, let’s look at some examples of cases that have occurred. 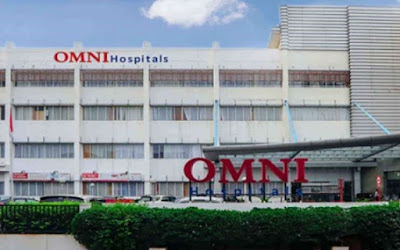 As an ordinary person, he also complained about the experience that was not wearing it through email, which then the email spread and became public consumption. The Hospital did not remain silent, they reported Prita Mulyasari on suspicion of defamation.

The result? Prita was fined 204 million rupiah and put him in prison. Even though the hospital finally withdrew its civil suit, this has become a wound for Prita and the people who want justice.

Is venting wrong? can the complaint land us in jail? In this case, the police should consider other aspects, such as motives and humanity. However, in this case the real victim is Prita. This also happens because there is no clear benchmark in the defamation law.

Fadli is a civil servant in Gowa Regency, South Sulawesi. In November 2014, he was reported to the police for insulting and defaming Ichsan Yasin Limpo, who at that time served as Regent of Gowa, South Selawesi.

Fadli initially shared his criticism through the Line instant message group which contained 7 people. In his criticism, Fadli considered that the Regent had been authoritarian and always put emotion first. The criticism also reached the Regent’s ears, who immediately reported Fadli to the police.

Fadli was sentenced to 19 days in prison and threatened with dismissal from his position as a civil servant. Is this punishment commensurate with his actions? According to the ITE Law, it is comparable. But in the eyes of us ordinary people, this case looks like an authoritarian leader who doesn’t want to hear criticism from his subordinates and uses his power to punish him.

Read also: Legal aspects in the midst of a pandemic

From the examples above, we can draw the conclusion that the ITE Law has not been running according to its function. There are still many loopholes that can benefit certain parties. Over time, the ITE Law has been revised several times.

This should be appreciated as a step by the government to minimize similar incidents so that they do not happen again. There will never be a perfect law but the government must be able to make laws that are as fair as possible to all levels of society.

Laws that are sharp up and sharp are also down. A law that will make people feel protected, not threatened by it. In the end, Indonesia is a democracy. A country that gives freedom of speech and opinion to its people. Do not destroy the democracy that we have built with laws and regulations that will tarnish our democratic values.