The first computer network topology is Bus. Usually used to connect computers with one long cable on several terminals. Later the cable must be terminated with a terminator. Generally, it is applied to coaxial based installations.

BUS topology usually has nodes that are connected serially along the cable. Then, both ends of the cable are closed with a terminator. The installation is quite simple. Then, the data packets intersect in a single cable.

Bus topology does not require a hub, but rather requires a T-Connector for each Ethernet card. Problems may often occur if one of the nodes is damaged. This will make the entire network down and unable to communicate.

One of the advantages of using a bus topology is that it is easy to install even though each cable must be connected to a backbone cable. In addition, the required cable length is also less. These two reasons make the cost much cheaper if you use a Bus topology.

Unfortunately, the Bus topology is difficult to detect errors. Then, the cable length is erratic because there is a limit on how many computers or nodes can be connected to the main cable. In addition, it is not suitable if installed on a computer in large quantities. 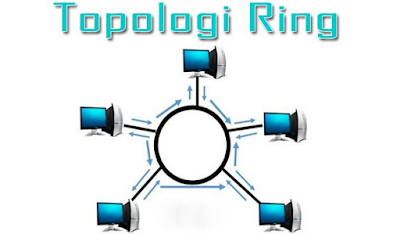 Ring topology is usually used in networks that have higher performance. Why is it called a ring topology? This is because the connection or connection between computers is made circular like a ring.

Ring topology is used for networks that require bandwidth for time-sensitive features, for example, video and audio. This topology makes each point / node function as a repeater that can amplify the signal. So, all devices can work together to capture signals assisted by tokens.

Other types of computer network topologies usually have one main connecting node. As for the ring topology, it has a network with a circular shape, so it doesn’t have a main link. The layout is also quite simple like a bus topology.

In this topology, data packets can only flow in one direction, so collisions can be avoided. Then, the problems that are often faced are usually the same as the bus topology, namely if one node is damaged, it will affect the other nodes.

This ring or ring topology is easier to use to run a one-way installation. Then, it’s also easier to add or remove devices from the topology. Usually, only two devices can be changed to 3 or 4. In addition, this topology can serve data requests simultaneously when data traffic is heavy.

Even though it is easier to use, but unfortunately if there is one failure it can cause failure of the entire network as well. This can happen because the data cannot be forwarded. In addition, it is also quite difficult to reconfigure.

Top of the Star (Star) Star topology or stars when viewed from the map form a star line. This topology, each workstation, already has a line that is directly connected to the server. Star topology has a core or middle node which is then connected to other devices.

This star topology has nodes that can communicate directly with the HUB. Then, if a data packet enters the HUB, there will be a broadcast to all connected nodes. The nodes can be very many. but in the future it will also reduce performance.

Fortunately, the Star topology is very easy to develop. This is because if one of the Ethernet cards is damaged, or one of the terminals with the cable is disconnected, then this computer network can still communicate. So, there is no need to be afraid of interference on all computers.

The advantage of this type of topology is that it costs less to install. This is because each device only requires an I/O port to be connected. In addition, the number of cables required is also less. This is because it only takes a cable to connect the device to the HUB.

The disadvantage of the ring topology is that if the central hub experiences problems, then the condition of the entire network can be disrupted. In addition, the number of terminals is quite limited, depending on the HUB. Then, the dense traffic demand causes the distribution of data packets to be slower. 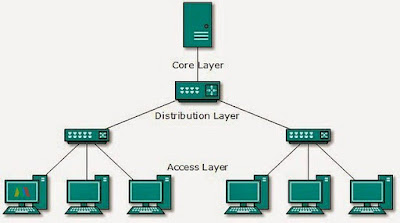 The types of computer network topologies are then in the form of trees or tree topologies. Actually this type is a combination of star and bus topology. This network topology usually forms the root of a tree.

Tree topology is a network that can communicate directly with its sub-nodes. However, data traffic must be followed to flow from node to sub node.

The advantage or advantage of a tree topology is that if one node or node is disconnected, the other sub-nodes will not be disturbed. However, it’s different again if the central part is cut off, then all nodes in each sub node will be cut off or die too. However, this is very rare.

Behind these advantages, unfortunately, the installation of this tree topology cannot use arbitrary cables. This is because the topology can only handle one traffic node for communication between one node and another that requires several hops. 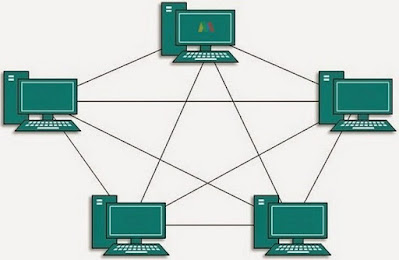 The last types of computer network topology that will be discussed is the Mesh topology which is a combination of the form of the Ring topology and the Star topology. This topology has a relationship of devices that are all connected to each other in a network, so they can communicate directly between devices.

This Mesh topology has redundant relationships between existing devices. The arrangement of each equipment in the network, is indeed connected to each other. However, if left unchecked and more and more connected, then it is very difficult to control.

This type is also called a mesh topology because it has relatively fast data traffic compared to other topologies. In this type of mesh topology, indeed every computer is connected to the server and receives data faster.

This topology has several advantages, namely the guaranteed capacity of the communication line because of this close and redundant relationship. Then to overcome various problems in this topology is also easier. Moreover, the fault tolerance is very high.

Furthermore, we will also discuss the shortcomings that exist in the Mesh Topology. The first is that it is difficult to install. Likewise when reconfiguring when the number of computers and connected equipment has increased. The maintenance cost of this view is quite expensive.

That’s an explanation of the types of computer network topologies that you should know. It turns out that each form of topology has its own advantages and disadvantages.