87% of Indonesian students feel that they chose the wrong major in college and it has a very, very fatal impact. Don’t let your closest friends experience the worst times because of the wrong college major 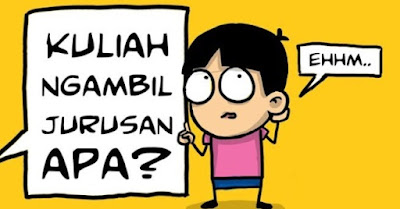 Are there many students who don’t choose their majors correctly? The answer is MANY.

Did you know, there are 87% of students in Indonesia who feel they are in the wrong major..

So what if it’s the wrong major? With one major, you will become:

1) Often do not understand the lecture material;

2) Not enthusiastic about going to college;

3) Not living in lectures, attending class for other reasons such as meeting a girlfriend or meeting friends;

5) Spend more time on hobbies (especially if the hobby is not useful) than studying;

6) There is no interest in developing self-ability;

7) Often daydreaming in the midst of lectures; and many more that ultimately make you an educated but unreliable workforce.

Do you want it or not? Let’s not go wrong majoring in college, let’s explore the interests and talents of friends..

My ideals are different from the wishes of my parents, what should I do?

“I want to be a chef. But my parents want me to be a doctor. What should I do?”

Let’s say his name is Andri. He is currently in the 12th grade. He is busy studying for the national exam preparation that will determine whether he will pass or not from high school. Various subjects were studied again.

Not only the national exam, Andri also began to mess around with his readiness to face the college entrance selection exam. Various preparations were made to deal with more difficult questions than the National Examination. Bimbel he followed diligently.

Andri actually aspires to become a famous chef. He wants to be like his uncle who has successfully opened restaurants in various branches.

The day has come, Andri must choose the department and faculty where he will study later. A fierce debate between Andri and his parents began. His parents wanted him to become a doctor. Treats many people and looks higher in social status in the area. Meanwhile, Andri is adamant that he still wants to be a chef. What should Andrew do?

Basically, the desire of the child and his parents in choosing the level of education is good. The child should be truly grateful for having parents who care about their education.

With his concern, of course, material or non-material assistance can be obtained by children. Likewise with parents, they must be happy and proud of their children’s desire to continue their studies to a higher level.

Moving on from that problem, there must be indicators that are used as a measure for children and parents in choosing the majors and universities to be taken. Indicators or benchmarks that can be used as measurements include the results of TO (try out), interests, and talents or abilities.

TO is a simulation of working on questions that are intended for students with the subject, number of questions and the time specified as training and preparation for taking the National Examination (UN) or SBMPTN (Joint Selection to Enter State Universities).

Children and their parents can observe this value to be used as an indicator in preparation for the child’s further studies.

According to M. Alisuf Sabri (1995: 84), interest is closely related to feelings of pleasure, so it can be said that interest can occur because of a happy attitude towards something, people who are interested in something mean their attitude is happy about something.

Interest has an impact on the fluency of studies when studying. Many early semester students then move to other campuses because they are not interested in majors and PT which is a choice or coercion from their parents.

There are also many students who take a very long time to complete their study period or even drop out because one of the factors is the problem of interest in learning. Therefore, interest needs to be given a portion in choosing majors and PT for the child.

Talent or ability is a potential inherent in a person. In this case, the easiest way to find a child’s talent can be seen from his achievements, both academic and non-academic.

Talent is closely related to interest because both influence each other. Children who are not gifted at something but have a high interest then talent can be born by itself. There is a turbulent passion coupled with the optimization of self-potential when interest begins to show its strength. This is where talent will be created, it’s just a matter of time which can’t be instant.

Basically the wishes of the child and his parents are very good. Each of them wants the best for themselves and their families. Only sometimes problems even appear here.

The desire between the two is sometimes collided with differences in choices, including choosing a higher level of study. Therefore, to overcome or minimize this problem, there is a foothold that is used as an agreement between the child and the parent, which includes looking at the child’s TO results, interests, as well as talents and abilities.

Thus, the success of the child’s studies and the happiness of parents can be achieved. Hopefully useful for all friends who are still confused about choosing a college major. ️

10 Questions To Find Your Dream Career

Confused about what your future will be? Do you already know yourself? Instead of continuing to be confused, it’s better to reflect on yourself with these 10 questions.

If I could switch professions with my friends, then I would choose the profession………because ……… I always wondered what it would be like to become ……… That was interesting to me because ……… If I had the right education or skills, I certainly try to be ………, because ………

This time the admin wants to share tips for passing SNMPTN considering that the SNMPTN quota is the largest, you know, which is 50%. Therefore, let’s look at 8 tips to be able to pass the SNMPTN.

Never – ever you jump out of the field of your major, for example from the science department take a major related to social studies, because your chances of passing the SNMPTN will be very slim.

Maybe entering a favorite major is the dream of every student who takes part in the 2022-2023 SNMPTN. But you also don’t force yourself to stay adamant about taking a very favorite major. Think first about the competitors in the department, then your report cards, then competitors from your school who list the majors.

Why? Because if your abilities are average, you probably won’t pass the SNMPTN in your favorite major, unless you have a lot of achievements and very good grades.

Many people think that the value of report cards that always go up has a very big chance to pass the 2022-2023 SNMPTN. It’s true, but for those of you who have grades that don’t go up, don’t worry as long as they don’t just fall and fall every semester.

Pay attention to the number of alumni who graduated at PTN last year. Usually if you enroll in a major university and many alumni from your school are accepted, it can usually create a little chance for you to pass the 2022-2023 SNMPTN

The way to sort the correct majors when registering for the 2022-2023 SNMPTN is to make sure the first section is your favorite major. For the 2nd department, choose a major that is still related to the field of study at your school, for the 3rd, choose a major that has a passing grade and little competitiveness.

If you have achievements outside of school, whatever the achievements, just attach them because they can help you have a chance to pass the 2022-2023 SNMPTN.

Lastly is prayer. Yes, pray. Make sure you continue to pray so that all matters are made easier and it is also easier to pass the 2022-2023 SNMPTN, amen.

Maybe that’s all the information about 8 Easy Tips for Passing SNMPTN. Hopefully it can be useful for friends who want to take part in SNMPTN. Even though these 8 tips won’t make you pass at SNMPTN, at least you’ve tried