What is coding, how is it different from programming? 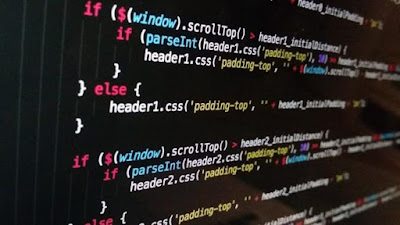 Basically, the term coding or coding is a process of writing an array of code using one or more programming languages. Coding is one part of programming, because coding activities cannot be separated from implementing the initial steps of programming. The person who performs this coding activity is known as a coder.

Why is a coder needed and what are the main tasks of a coder? A coder is needed because machines (language translators) cannot interact directly with humans, and only understand machine code, namely binary language. Therefore, the main task of the coder is to create programs by translating them into a language that is understood by the machine.

A coder is required to have a thorough understanding of the working of the language. However, the code used must be in accordance with project requirements and instructional information. This is the first step to developing a software product.

Programming or programming is a bigger aspect than coding, of which it is a part. It is the process of developing an executable software program that is implemented without errors. People who do this activity are usually called programmers. A common job of a programmer is to analyze problems in code and provide solutions.

Application creation requires several necessary steps, including planning, design, testing, deployment, and maintenance. So, programming does not only deal with coding, but also analysis and application of algorithms, understanding data structures, and mitigating problems. Overall, the whole process is called programming.

A programmer creates a complex, machine-readable, and executed program that provides a complete set of instructions for the computer to execute. It takes years to become a professional programmer. If you can build a program and make sure that it has no errors, you can consider yourself to have leveled up in your career as a successful programmer.

Fundamental Differences Between Coding and Programming

Coding and programming look the same from one side, but actually they have a fundamental difference. If we remember again, coding means writing code from one language to another, while programming has the meaning of programming a machine with a series of commands to run.

The job of a coder is to translate logic into a language that a machine can understand, whereas a programmer has to do more than just write code. Let’s look at some points of difference between these two topics to get a clear picture:

Coding is the part of programming that deals with converting language into binary commands that are understood by machines. Programming is the process of creating programs that follow certain standards and perform certain tasks.

Coding is about translating the logic of requirements into machine understandable code. On the other hand, programming demands analysis and conceptualization of different aspects of each program and finding solutions to any problems that may occur during the process. It also involves important parameters such as debugging, compilation, testing, and implementation.

Coding does not require so much software to complete. A simple text editor like WordPad or Notepad is enough. Currently, IDEs and debug tools like Eclipse, Bootstrap, Delphi, ATOM are also used.

A programmer is expected to know advanced concepts from Git and Github, Database tools, analytic tools such as Apache Spark, presentation tools, cloud tools because their scope is wider.

A coder must be able to write computer code. So, the skill needed if you want to become a coder is to master one or more programming languages.

There are so many programming languages ​​that you can learn, some of the most famous include:

a. HTML/CSS/JavaScript: A popular programming language for those of you who want to focus on web development or website development.

b. Pythons: This one language is certainly no stranger to those of you who are studying in college with a major in IT. The python language is great for practicing programming logic, and its popularity has steadily increased in recent years.

c. Kotlin: This programming language is officially used for Android development. It is suitable for those of you who want to start a career in the field of Android Development.

Whatever programming language you choose later, you must understand the syntax and basic logic of the language. From there, you can build logic and explore with code.

The skills needed by programmers include research in finding data, brainstorming (critical thinking), to formulating solutions.

For coding, the expected result is the result of applying a given set of instructions to the computer with a piece of code. On the other hand, after programming, the result obtained is the entire application, software product or website.

Coding is the main step and translates requirements and code to be converted into machine understandable syntax. However, programming is concerned with programs that can be executed to produce mechanical output following input and requires knowledge of the complete software development life cycle.

How do you see the difference between coding and programming? Although different, coding is an inseparable part of programming.

So can every coding be considered as programming? It depends on the purpose of doing the coding itself, and from the explanation above we can know that coding is only part of the activity of programming.