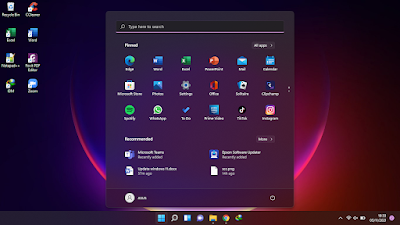 For those of you who already have a license for Windows 10, you can upgrade Windows 11 for free through the windows update feature. Everyone knows that windows is the most popular desktop operating system from the first release to the Windows 10 series. When compared to some of the older releases it is clear that Windows 11 has several advantages and disadvantages. As a loyal user, of course you have to know this so you can adjust it to your needs

Well, here I will describe the advantages and disadvantages of Windows 11. Before you decide to install Windows 11 .. make sure your PC meets the criteria and has a capable capacity, yes.

Every time there is a system update, there must be something that distinguishes between the old and new systems. Just like Windows 11 and its predecessors. Lots of new features that you can have after updating the OS system.

On the Windows 11 operating system, Microsoft has provided a tablet mode. Previously, this tablet mode also existed in Windows 10 but there are still many shortcomings. The presence of Windows 11 provides a tablet mode that provides more complete features such as a touch screen, digital pen, voice typing, and custom keyboard typing.

In addition to the many new features, Windows 11 also provides an elegant graphic design appearance. Through this new update, Microsoft provides many pretty big changes in terms of graphics, a new taskbar, and an adaptive cursor. This is felt in the user interface that is different from before.

The search engine used for Windows 11 uses Bing. This search engine is no less popular than Google, ranking right below Google as the most used search engine. Well, it’s not much different from Google, where when you want to submit articles or download anything you need an account. Here you need a Microsoft account to be able to access Bing

The interface in Windows 11 is a Blending desktop and a modern interface. These two features make it easy for users to use UI-based applications that can be accessed using the desktop.

For those of you who want to experience this feature, you can upgrade the system to Windows 11. This feature was previously expected in Windows 8.1, but it looks different from Windows 11.

In addition, this feature speeds up the data retrieval process. You can keep your data more secure by using cloud-based storage.

Xbox Windows 11 is perfect for those of you who like to play games. Of course you will feel pampered with the Xbox Windows 11 feature. Windows 10 does not yet have this feature, so you can say this is very new which is intended to improve the playing experience for gamers.

Xbox features embedded in the advantages and disadvantages of Windows 11 offer a fun service and can make gamers more flexible in playing games. With this you can add properties such as DVR or Share Connection.

Read also: How to upgrade to windows 11

Windows 11 uses a 64-bit chipset. Indeed, this does not need to be complicated by looking at technological developments that almost all devices already use 64-bit chipsets.

However, for those of you who use an old PC or laptop, it will definitely be an obstacle in running Windows 11. This is one of the shortcomings found when you use Windows 11 with an old PC device that is less than 64 bit.

In addition, you also have to provide 64 GB of free space to be able to operate it. Of course, this is quite large for emptying the room, and it’s a little hard to believe that if you don’t pay attention to it, it can cause system performance to decrease

Well, for licensed Windows 10 users, you can get Windows 11 updates for free. However, in addition, users must be able to meet the minimum hardware requirements at least already have TPM 2.0 with secure boot.

Windows 11 is a newly released device operating system. Where there are still some flaws and imperfections, so there are still many bugs found. It is also possible to find various OS problems in the application of Windows 11

Surely Microsoft has given the best before launching Windows 11 which is done by experts. They pay attention to various feedbacks to make it easier to solve various problems that will be found from users.

When upgrading to Windows 11 from Windows 10 or when installing updates to Windows 11, some features may be deprecated or removed. Please see below for information on some of the key features affected: