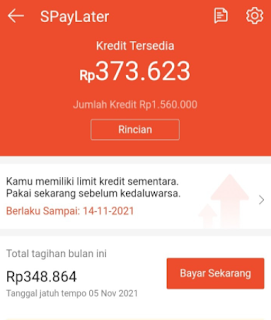 Is one of the payment methods launched by Shopee. Yes, we know that Shopee already has a big name and is now starting to expand to the Paylater payment method.

This paylater has both positive and negative sides. On the positive side, everyone can shop and pay for groceries as long as they have an ID card and are verified. With a limit that is adjusted to the owner of the ID card. Each ID card has a different limit. How it works is simple, ID verification, selfie and ID card. Wait max. 24 hours, immediately there is a limit. This limit cannot be cashed, it can only be used for shopping at ShopeePay. Small interest in installments of 3-12 months.

But, once it’s late, the interest doesn’t play around, 5%/month. ️

Now we enter the Psychological Trap

This trap is not a trap from Shopee, but from myself who really can’t hold back my shopping urge

Confused? OK, let’s break it down

Example. I, have a limit of 1.2 million. I bought a new cellphone for Rp. 1.2 million. My installments take 6 months, 225 thousand

Well, one of the advantages of Shopee is that we don’t pay right away on that date, so the payment depends on the agreed period when we pay in installments. I took my cell phone on August 26th, periodic transactions entered 25 Aug-25 Sept. Pay it? October 5th. More than a month, just paid

It’s automatic… Because there’s another limit, I’ll go shopping, use ShopeePay Later again. Until finally, the installments that were previously only 225 a month, are now 350 thousand.

In fact, I haven’t paid the installments this month, this afternoon I got an additional limit of 360 thousand. And it’s pretty good, right?

This trap will not stop until the self declares to stop. So before you open ShopeePay Later, make sure you have strong faith, you can’t afford to shop for heavy wallets.

Don’t let it, it looks like ‘wow, the installments are small’. Yes, it’s small at the start, but if you don’t have a lot of faith and you happen to be in bad shape and can’t pay, the installment will swell at 5% per month. You don’t pay for 2 months, auto heart attack

Have a limit of 2 million

2 million has not been paid for 2 months, already subject to a fine of 200 thousand. That’s just a fine

If we take the example of the case earlier, the 350,000 installment is the main installment, while the fine that must be paid that month is also 200 thousand

What looks like a fine of 5% per month limit has actually become about 50% more in monthly installments.

So what if you don’t get paid?

It’s safe, if you don’t get paid to Shopee, you will be considered finished from the debt.

However, ShopeePay Later is supervised by the Financial Services Authority (OJK) and for sure, the BI Checking Blacklist is real

You can’t take motorbike installments from any leasing, house installments, borrowing KUR business capital, mortgages, even cellphones. If it used to be 5 years, now 10 years can’t take anything.

Even after 10 years, you are not immediately approved if you open a new installment. If you want to clear the blacklist, you have to pay the installments + the fine to Shoppee first. After that, even if you get it, the limit is small and risky because our electronic transaction history is bad

So, for those who want to open ShopeePay Later. Strengthen your faith first, immune to shopping, thick wallet.