Pure Mathematics Majors Study Anything – Review of the first semester of pure mathematics majors, Hey everyone, I’m class 21 majoring in pure mathematics, so here I want to give you an overview based on my experience, what’s going on in the pure mathematics department, is it hard or not? what is the lesson like? what’s the job like? 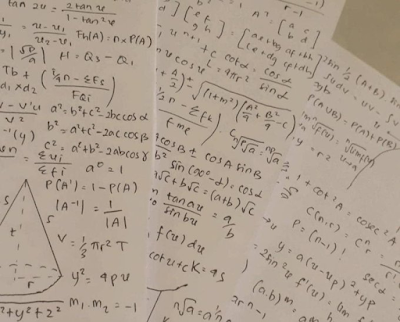 What subjects are there in the pure mathematics major? OK, I’ll explain the courses in semester one and their assignments.

Calculus 1 is almost the same as in high school, there are limits, derivatives, functions, but in college we also learn how the derivative formula can do that, where did it come from. So, for the task, we are given questions like math

In general and in the form of an essay, try to do it in a detailed way because the process will also be assessed.

Honestly, I’m having a lot of trouble in this matkul because it’s completely new to me, I’ve never learned coding before, oh yeah, at my university at smt 1 it’s in C++. This is more of a theory, later we will learn the basics, such as arrays, if-else, etc. (but it’s still hard for me😭).

The task is like making a program, then the coding will be copied and then on my Univ apk, there is already a place for it (I don’t know how to explain it) just collect it in the Univ apk. Then there is a final project, a group is formed and then a program is made which will be presented later.

Now, if it’s more of a practice, so there’s a lot of practice, but in practice it’s in the assignments. In class, they usually discuss the answers to assignments, the lessons are the same as theoretical programming.

His job is also to make a program, copy the coding and convert it into a pdf (in my opinion, this is more of a task than theoretical programming). Oh yes, in this matkul there is also a final project, almost the same as in theory, create a group and then present the program for later.

The lessons are almost the same as physics in high school, there are forces, waves, glb-glbb, etc., but we also study them in more detail, since where do we get the formula from. The assignments are rich in physics questions in general and usually take the form of an essay.

This lesson is also almost the same as in high school, there are acid-base, polar-non-polar, etc. It will also be explained in more detail here, like the concepts and there are a few new materials that I didn’t know about in high school (like Molecular Orbital diagrams, etc.).

The assignments are rich in general chemistry questions and are in the form of essays.

There are lessons that are the same as in high school and some are not. The lessons are regression analysis, one-way ANOVA, hypothesis testing, etc. There are lots of formulas in this matkul.

In statistics, it is divided into theory and practicum, so there are two classes, but it still counts as one matkul. In theory, as usual, the formulas will be explained and then examples of questions.

In theory, as usual, the formulas will be explained and then examples of questions. In the practicum, we were told to download the minitab and spss apk later we will practice there and it’s a bit dizzy because we have to know the steps.

The task is that the theoretical ones usually work on the questions, they are asked to look up questions and discuss them, and some are asked to make infographics. For the practicum, the task is to have a report (practice report) so later we will be given a question and then work on it because it is in the apk, then the results will be in the SS, enter the word like that,

But that’s not all, the report also includes interpretations and explanations, etc.

7. Introduction to mathematical logic and sets

The lessons include declarative sentences, tautologies, quantifiers, sets, etc. For example: “there is a singular x which has the property of p” I will write it later with logical symbols, just like that. This is a difficult matkul in my opinion.

The task is given a question that will be done like in general.

This is according to each religion. In my case, there is rarely a task at the matkul of his religion.

Well, it’s already in semester 1, now I also want to add a little picture about the matkul in semester 2.

In semester 2 There are compulsory subjects and elective matkuls. There are many choices for matkul, so you can choose which one you want to take, if you are required to take the matkul, you have to take it.

So far we are still studying a system of linear equations but associated with matrices like that.

According to what I’ve learned, there are vectors, lines, gradients.

This is a continuation of calculus one, when in smt 2 you study integrals and it is also richly explained where the formula comes from.

I’m having a lot of trouble in this matkul, it’s just like that. This is like a continuation of mathematical logic, so there are almost no numbers.

I haven’t started studying yet, yesterday I was still introducing and discussing the college contract

Actually, there are still other matkul options but since I’m taking this matkul, I’ll just explain this matkul. So far it’s been fun, gaiss matkulnya, but also a bit dizzy hehe. There are strategies like that.

This can also be treated in everyday life, for example, if you want to buy ice cream, but there are a lot of ice cream sellers near you, for example, the ice cream is the same, so you can decide which seller you want, the main game theory is that.

Is it difficult to study in pure mathematics?

If you say it’s difficult, yes, it’s hard, here the quizzes are a little bit and the time is also a little, but the problem is difficult, but here I’m not alone, usually my friends in majors help each other, so teach someone to be a tutor, even from the catering business there are tutors, from the faculty there is also a tutor at smt 1 when it comes to uts/ulas usually discussing last year’s uts/uas questions so it helps.

Oh yes, in smt 2 there are also tutors from kating in certain matkul2.

Okay, that’s all the article from me, hopefully it will be useful for all of you. Sorry if there are wrong words, sorry if the article is messy because this is my first time writing an article.

If anyone wants to ask more questions about the pure mathematics major, please comment