I want to discuss a little (or a lot) about the psychological phenomena that occur on Twitter. 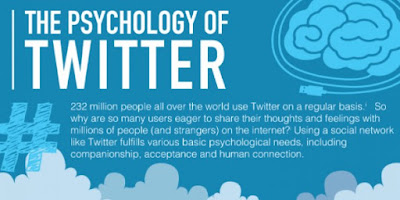 Let’s discuss the phenomena one by one!

These are some of the statements I often hear from some of my mutuals or past tweets I read.

Some of the reasons, because on twitter people can be more straightforward, and not as stressful as Instagram. Is that true?

Actually, one of the causes is the difference in appearance and form of content from these two platforms.

Instagram is a platform that requires posting images in its feeds, and writing only as a complement to the caption.

This causes the effect that people tend to display beautiful visuals. Or the term instagram-able. This is also what makes Instagram seem to highlight perfection, rather than captions that are secondary to attention.

So here the focus of attention is writing. people prefer their writing.

In addition, instead of showing “personal perfection” on Twitter, the preferred context is writing that represents many parties. Feels relatable.

So instead, perfection is not a favorite on Twitter, but writing as it is.

Writing as it is is also the most comfortable means for someone to complain about what he feels.

Especially if you find writing that you feel relates to, it makes netizens feel not alone and more comfortable.

Back again, view. Whether we realize it or not, twitter that puts forward writing makes in one screen one look, there are many posts that can be seen. In contrast to Instagram, which with its visuals, just one post fills almost one screen.

But of course, back again to the needs.

For people who like to display their work, the Instagram design has certainly been designed to support this.

So which one is better?

Self-actualization is one of the basic human needs, which of course needs to be fulfilled in order to achieve prosperity.

In this era of social media, twitter is a place for someone to express their “unek-unek”,

Even with one of its unique features, which is that it has been designed to type simple things, given the limited character of the writing, it finally fulfills the sense of self-actualization.

Moreover, if there are comments to support. Like and also Retweet

3. Content in the form of writing, allows someone to know or understand what other people feel more specifically.

Although, of course ambiguity still exists. Although there are also those who cover their privacy.

However, with this form of writing (especially if it extends) it is easy for people to know what other people are complaining about. Not as ambiguous as social media which only contains big photos. This is also evidenced by research that says Twitter netizens are low on stigma

Especially with the support of many campaigns or support given to the true story of the victims of a certain crime.

4. Display tweets and replies tend to be the same. It doesn’t look bigger or too lame.

This allows for an equal impression between posts and comments that other people have given.

What is the reason?

Because of the dynamics of twitter, as described in the previous points. It’s as easy as when you think of a certain idea (and it doesn’t have to be something great/perfect) then it’s easy to post it, and get likes and retweets.

Whether we realize it or not, those likes, retweets and comments make a person feel validated and ultimately feel more accepted than in the real world. especially if there are certain problems, feel rejected or not responded well in the real world. finally hooked on twitter.

6. The existence of a base makes it easier for someone with the same interest or identity to join.

Regional base, based on hobbies whether it’s about movies, cooking, k-pop, schools, colleges, makes it easier for someone to gather with their social groups.

However, there is also a “dark” side of Twitter. What’s that?

1. The ease with which the content is milling about is a bit difficult for someone to filter. This sometimes requires the help of a word filter, block, or mute feature.

2. Because Twitter’s content is dominated by writing, one of the problems is caused by writing.

How about an example?

This is exacerbated by one’s lack of understanding of the truth. Which is a personal truth (eg from a certain belief) and a universal belief or a fact.

And also differences in educational background, character, and age.

3. If you don’t like someone, Twitter is an easy area to attack. Because it’s easy to tag in tweets and just give hate speech.

4. It is easy for netizens to empathize on Twitter, sometimes it is not accompanied by a valid check. Consciously or not this is also a problem.

An example is the “spill” trend that is now skyrocketing on Twitter. Spill is to reveal certain secrets or information.

For example, the case is a woman spilling that she was harassed by her boyfriend.

Then he gave screenshots of evidence of the chat which was only part of the conversation, leading to incriminating his girlfriend as the accused.

Though it could be manipulation. It’s just a personal opinion and actually no harassment.

Indeed, there are also many “spill” actions that are valid and help the aggrieved party.

But sometimes there is also abuse by certain elements that are slanderous.

The wise solution, of course, is to validate a lot of evidence before judging directly from the statements of only one party.

Many are suudzon with the yellow snake stealth, even though the fact is not like that.

Hopefully this article is useful for you!

Of course, hopefully this will also be a concern for @TwitterID to continue to innovate and consider the pluses and minuses of all its features.

every point discussed is really relatable and that’s true, always healthy and smooth career going forward. Amen :)) Waiting for the next article 🙂