Phonology Lecture, What is Phonology and the Difference with Phonetic – An overview of the phonology course for those of you who are interested in majoring in English literature!

So, here I will discuss the general description of the phonology course from the understanding to the parts, I will not go into details because I return to the title “overview”

In addition to majoring in English Literature, English language education is also studying this course.

– Phonology (Phonology) is a part of grammar that studies the sounds of language (Keraf, 1984: 30)

– Phonology is a field of linguistics that investigates the sounds of language according to their function (Kridalaksana, 1995: 57)

Based on some of the definitions above, we can conclude, the notion of phonology (phonology) is a branch of linguistics that investigates, studies, analyzes, and discusses the sound of language produced by the human speech apparatus according to its function.

You must be wondering, what is the function of studying phonology (phonology)? 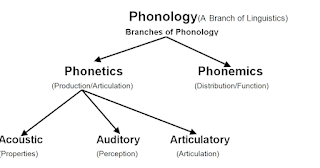 By learning phonology, you can:

– Knowing the sound change in a word

– Knowing about the process of sound formation, delivery / pronunciation.

– Knowing how the organs of the human body work, especially those related to the use of language.

The branch of phonology is divided into 2, namely:

– Phonetics is a branch of phonology that analyzes and investigates speech sounds used in speech, and learns how to produce these sounds with human speech tools (Keraf, 1984: 30)

– Phonetics is a branch of phonological studies that studies the sounds of language without regard to whether these sounds have a function as a differentiator in meaning or not (Chaer, 1994: 102)

– Phonetics is the science that investigates the production, transmission, and reception of language sounds; interdisciplinary science of linguistics with physics, anatomy and psychology (Kridalaksana, 1995: 56)

From this we can conclude that phonetics is a branch of phonology that investigates, studies, and analyzes how sounds are produced, conveyed and received speech sounds/languages ​​used in language.

speech without regard to its function as a differentiator of meaning which involves the analysis of anatomy, physics, and psychology.

Phonemics is a branch of phonology that studies the sound of language by paying attention to the function of the sound as a differentiator of meaning. Example: sound [p] on the word [pace], [space], and [map] not the same. Things like this are the target/object of phonemic science.

– Phonemics is a science that investigates the phoneme system of a language (Kridalaksana, 1995: 56)

In conclusion, phonemics is a branch of phonology that studies and investigates the sound of speech/language or the phoneme system of a language in its function as a differentiator of meaning.

What is the difference between phonetics and phonemics?

If in phonetics we study all kinds of sounds that can be produced by the speech organs and how each sound is carried out, then in phonemics, (cont..)

We study and investigate which speech/language sounds may have the function of distinguishing meaning.

According to the process of the occurrence of language sounds, Chaer (1994: 103) distinguishes the existence of 3 types of phonetics:

2. Acoustic phonetics studies the sounds of language as physical events or natural phenomena. The sounds were investigated for vibration frequency, amplitude, intensity, and timbre.)

3. Auditory Phonetics studies how the mechanism of receiving the sound of the language by our ears

If we make an image, it looks like this:

Sis, what is the difference between phonology in the faculty of literature and education?

If you go on to master/S2, there are 3 concentrations to choose from:

So, if you continue with S2 (M. hum), you can choose which one you want to study, so you don’t just study “Literature”.