Living with Paranoid Schizophrenic Patients – Living with schizophrenia-paranoid Dad — Hello, my name is Mida. Yep, according to the title here, I just want to tell you a little about how to live with a schizophrenic-paranoid person. My father has had the disease since about 1988. Yes, it’s been 30 years, hasn’t it? 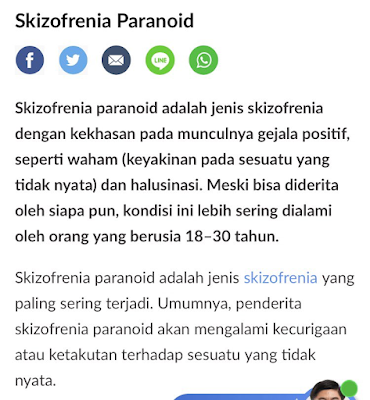 At first in elementary school, I certainly didn’t understand my father’s illness. Every time he talks to himself, all I know is that crazy people do things like that. And at that time I was so embarrassed to introduce my father to school friends.

My father always heard whispers from several people, some bad and some good. The evil one usually attacks the father’s inner peace by threatening, either to kill the father or his wife and children.

These attacks don’t happen all the time, but when they do happen, my father can scream as loud as he can until all the neighbors hear. At that time I was sitting concentrating because tomorrow was going to be a test, suddenly my father smashed the table and shouted at me “YES YOU DEVIL!”,

I, who was still in elementary school, suddenly burst into tears of fear. Not long after that my father hugged me while apologizing “I’m sorry, dad was just forced”. Incidents like this don’t just happen once or twice, this has become a routine in my family.

It’s no wonder that my older sister is an extremely introverted person, when she’s just talking to people she’s nervous, she can’t look the other person in the eye at all. A few years later, I also began to understand enough about the “world” that my father had. When I was in high school, I started to find out. I always ask my mother, “Have you been to the doctor before?”

because previously my mother and father’s brothers thought that my father was in a trance. Mother said that she had been to a psychiatrist before, but my father didn’t want to come back because the medicine he was given was too strong and made his heart pound.

Father often does not want to admit his illness, this is what makes it quite difficult for us to persuade him to seek treatment again. When this “bad guy” threatened my father, he often went to the police station for help.

It was clear from the police station that they did not receive the report because it was not real. Suddenly, my father became more stressed because he felt that the police were “cooperating” with the evil one.

In 2014 When I was in college, my father often complained that he wanted to go back to his hometown, Lombok. He said, my father was not allowed to live in Yogya by Sri Sultan HB.

If the father stays here, one of his children will be killed. Every night my father doesn’t sleep, even for a week he doesn’t sleep. Dad screamed until his voice ran out.

In my heart I am angry, why am I living with this condition, on the other hand I am sad, from my father’s screams, I quite understand that he is suffering.

In the end father and mother left us their children to return to Lombok. This is where my life gets shattered. I was so sad that I got lost.

For those who are curious about father’s work. He is a lecturer at a state university. You could say he’s super smart. Dl get a scholarship to study in Saudi Arabia and all ranks. But in my opinion, this intelligence is one of the triggers that made my father get this disease.

Where are his friends? Since suffering from this disease, my father became a social worker. All his friends who did good he always suspected. For example, his friend came to the house bringing gifts.

When dad eats, dad’s stomach feels bad. My father immediately suspected that his friend wanted to kill him, when in fact his stomach was fine.

Only from the mind can he immediately feel like the real thing. My father decided to retire early when I was in high school, this was also because he was influenced by the threat from “the evil one”.

In 2016, my second sister was about to get married. Finally my mother and father returned to Yogya. Apparently returning to Lombok did not make my father better. Quite the opposite.

My father became more and more contained by his hallucinations. Until one day he thinks mother is the mastermind of everything the “evil” does to father.1

“THEY SAY YOU’RE THE BOSS, STOP THREATENING ME!!” that’s what dad shouts to mom. Mother, who had been patient and faithful for decades to accompany my father, finally had a mental breakdown. Mother became thinner, but did not stop praying for father in a third of the night.

let’s continue the story. because actually if it’s a story like this, my heart is pounding. Let’s take a break.