STNK is a vehicle number that must be owned by vehicle owners. This STNK is useful for identifying your registered vehicle. With this STNK, you can legally use your vehicle.

Of course, every inspection or police raid on this STNK is mandatory for you to bring along with your driver’s license. But if your STNK is lost, it’s a different story.

This will be a little inconvenient. Here I want to tell you how my experience in taking care of a lost STNK outside my domicile city was. I already know that I lost my motorbike license.

Now, this time I want to share my experience taking care of my lost license in (Yogya). Because honestly it will be more complicated if you don’t know the right way.
Just go without the babibu.

So the story is that my motorbike license was lost in the Jogja area, but because my license was issued in the city of Malang,

“In my mind” I have to go to Malang, take my motorbike to Malang (because I have to physically check the vehicle) if I want to make a new driving license.

But it turns out that we can take care of lost licenses outside the city (jogja), so we don’t have to bother bringing the vehicle to our domicile (unfortunate).

* when I go to the Gondokusuman POLSEK, the father is really fast, doesn’t make it complicated.

Later you will get a letter of loss from the police.
Cost: Free

Why make all kinds of advertisements? I’ll see at the end, just continue reading this.

Go to Radio * yesterday I went to swaragama at UGM, brought a photocopy of the letter of loss from the police.
Says, “make ads lose licenses”
Later, she’ll go home right away. Easy no hassle
Please don’t forget to ask for a note as proof of showing.
Cost : 6000 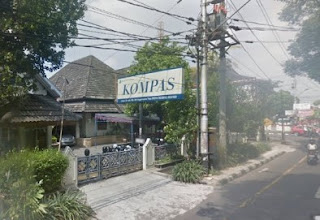 It’s the same as radio advertisements, going to the newspaper office *yesterday I went to Kompas, then I gave you a photocopy of the letter of loss, later the officer went straight to the office, just made it for 1 day. Don’t forget to ask for a note, please save the note.
Cost : 11,000

Step 4: Buy Newspaper
After posting a newspaper ad, don’t forget to buy the newspaper and then open the Central Java info page, look for the ad for your loss, cut the ad and paste it in the note. 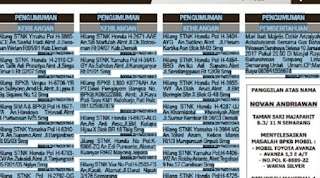 Step 5: Go to SAMSAT
Things to bring:
– ORIGINAL BPKP
– ORIGINAL ID card according to BPKB
– Police report
– Radio and newspaper advertising notes
– Vehicle
Go to the counter”Physical Check Helpn”
After that your vehicle will be checked, then you will get 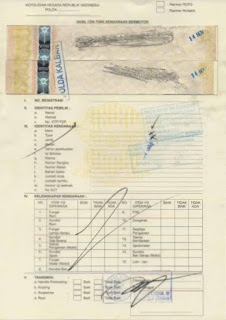 Step 6: Send the document to the city of domicile.

Send all documents to the city of domicile to continue the process of making a new stnk. Because the creation of a new STNK must be done at the same domicile when the STNK was first issued/made.

Once sent, you can ask your relatives to take care of making a new STNK at the SAMSAT of your domicile city. All you have to do is bring all the documents, including the original BPKB and KTP, so the new STNK can be issued immediately.

I hope this thread helps you and doesn’t feel what I feel. Because to be honest, it’s wasting time. Especially for those of you who are already working or studying.

If you have any questions, please comment in the comments column below. Thank you