How to Overcome ATM Skimming and Get the Money Back – Experience with ATM skimming and how to get the money back.

Since lately I’ve been seeing threads of lost money victims so often, I wanted to share my experience when I was a victim of skimming last December 2021. 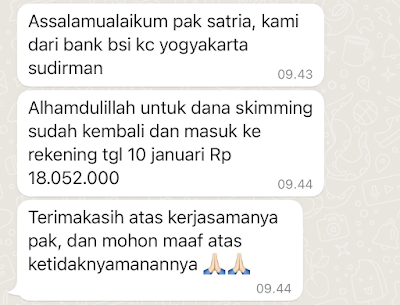 There’s nothing strange at the Mandiri ATM in the rest area, it’s like ATMs in general, I took the usual rich money and continued my journey to Merak port.

The next day, I idly checked the mutation and DAAAMMNNN the money came out automatically.

The total is about 18 million

The first thing I did was call CS asking to block the card and report any outgoing transfers without my knowledge.

The second thing is mesoh mesoh, how do you want to pay off a ring for a proposal, don’t have money

Oh yes, at that time the CS said that he was told to make a report too.

Since it was the weekend, so I decided to go to BSI and the police office on Monday.

How to Overcome ATM Skimming and Get the Money Back

After waiting for a long time, I finally met Mr. Isilop, I will tell you the chronology and the purpose of coming to ask for a certificate as a condition for taking care at the bank. But Mr. Isilop said he couldn’t serve because I had to go to Cipondoh because of the suspected skimming case there. Hadeh

The same thing from Isilop in Kebon Jeruk and Isilop in Cipondoh, they seem to be trying to “take over” this case, like wanting to check the ATM crime scene in the rest area, even though I went to the police station just to ask for a certificate, and Isilop also said that the case like this it’s hard to get your money back -_-

Because I was tired of Isilop, I told my aunt who worked at the bank. He directed me to go directly to BSI and meet his acquaintances. At that time I had to go to Depok because my family was staying in Depok.

The next day, Tuesday, December 21, 2021, I went to BSI Margonda, Depok and it turned out that I could do it, don’t worry about using islopan islopan. I can’t imagine how complicated it is to follow Pak Isilop’s words

That day, my case was submitted for investigation by the central BSI. Alhamdullilah found a bright spot

CS also said that if it was actually indicated that skimming was indicated, the money would be returned 100 percent. At that time, they were also informed that it would take a long time, like it could take up to 1-2 months. But rather than not at all? Yekann…

Because I domiciled in Jogja, the case will be continued with the BSI Sudirman Jogja branch

There are documents that I have to fill out, at that time they were emailed and printed out, then filled in and submitted to the CS BSI.

Protips so you don’t get skimmed:

1. If you can take it at an ATM with a bank, for example not at a gas station, etc.

2. Check the top of the numpad, skimming actors usually put the camera to see our atm pin.

3. In your bank, if there is a cardless transaction feature, just use it

Guys, there are no insiders in this process. My aunt from BRI asked her friend if at BSI what was the procedure, where to go, my aunt directed me to go straight to the branch office instead of doing what Isilop said

My papa, 2 years old, also got skimmed at a bank Mandiri ATM with a nominal value of almost 20 million. I was caught because papa was using an SMS notification, I helped him stay calm and help read the account mutation which turned out to be used for transfer via Mandiri ATM on Jl Pemuda Semarang (I’m dom Sidoarjo).

I’m helping papa call the Mandiri bank callcent, all atm are blocked and the next day take care of it at the regional office. Ask to be equipped with a police letter as well. Thankfully, Mandiri replaced it in full according to the amount, and the process took up to 14 working days.

I feel like I got skimmed at the Indomaret atm machine near my house (because I often use the bill there), after the incident my papa, my brother and my neighbor who took money at the same loc atm were skimmed until the balance disappeared too. but Mandiri is responsive and immediately returns the process

so the skimming person puts the skimmer in the mouth of the atm, the tool can copy data from the magnetic stripe atm bil (zinc items on the back of the card).

I also want to tell you, in 2016/2017 I forgot the year I was skimmed at BRI. 10 million sold out due to panic, I just checked in the evening at night, the next day I went to the BRI KCP. There I was helped, told to calm down, cooperative in explaining the chronology because I’ve never checked old accounts

Eh, it turns out that the skimming method is a transfer, to a foreign bank with a nominal value that is not round (eg: 235.679). Because there were not many years like that, it was handled very quickly. After reporting, BRI promised to return it, just check the mutation often to see if it had entered.

Not until 14 days, the money has come in again. And taraaaaaaa came back 10 million even though a few months later, the money had not been used up, it was stolen by another sik anw, after being skimmed, papa immediately told me to close the savings book, told to keep it in the closet of my parents’ room