Maybe someone doesn’t know the code for an unprotected excel file. Usually, there’s an excel file that can’t be changed/edited because it’s protected, so when you use it, you can open it later.

Excel is one of the software used by people to process data, numbers and writings that are useful to make it easier for them to achieve their goals.

by using this Excel we can more easily arrange the numbers according to what we need. In Excel, you can create documents of whatever content they contain.

it turns out that in Microsoft Excel it can also be done to lock an Excel file so that it cannot be opened by strangers.

it through a password. but sometimes when we need an Excel file whose contents are very important then it is protected or passworded so that we cannot open the Excel document.

This makes it difficult for us to access its contents. because there are so many requests to solve this problem, here we will tell you the solution to all of you.

To open the locked Excel file, we can actually use a password to open it, but we don’t know when it’s broken at all, so here we need a tool that can disassemble the Excel file.

here we have a very useful script to open an Excel file that is protected or locked so it can’t be opened or can’t be edited. to solve this problem you can enter a script into Microsoft Excel so that the document can be opened.

like this is a very powerful attitude to do because with this script you can directly access the locked Microsoft Excel.

Usually, if a file is locked, we can open it using an online application. but some online applications on the internet cannot be used 100% effective because it is one of the universal methods, but here we provide a method that is rarely known by others so that it can certainly help you.

Try to imagine, for example, that you have an apple Excel that is very important from downloading on Google and its contents are very useful for you about school or college and the problem is that it is locked, so to find it you have a way for you, here’s the tutorial

How to Open Password-Locked Excel Without Software

A. How to Open an Excel File with Password Without Software

STEP-1. Open Windows Explorer or similar and look for the target file

STEP-2. Right-click the target file, rename (Rename) as well as change the extension from .XLS to ZIP

STEP-3. After the file is renamed and the extension changes to ZIP, then Unzip it.

STEP-5. Inside the xl folder there is a “WorkSheets” subfolder, open this folder.

STEP-6. In this WorkSheets folder there are several files with the extension .xls

STEP-Once the file is opened in notepad, its contents are XML language. If you’re not used to it, don’t panic. Find the line of code with the expression “

STEP-8. After the line of code is found and deleted, save the file again.

STEP-10. Open the file with Excel as usual, naked without a password

3. Enter the code below, hihihi, then press run/F5 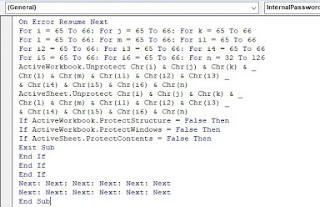 This is one of the useful scripts to provide a password file. in other words we can mention that this attitude is a useful attitude to pay for a file that is protected by a password.

to use this script as described above is very easy without the need to use additional software.