Windows subsystem for Android is only available for US users, as Amazon Appstore is not available in other regions. Even if you want to bypass, you must have an Amazon account based in the US and choose Windows Insider Beta to get this feature. In addition, you must install the Windows 11 operating system.

Initially, Microsoft only offered WSA features to members of the Windows Insider Program in the US. Redmond says that Dev Insiders will soon have access to the Windows Subsystem for Android. This is not surprising, because anything new usually appears first in the developer. If you don’t want to wait for WSA to become available, you can force the feature to be installed manually. here’s how 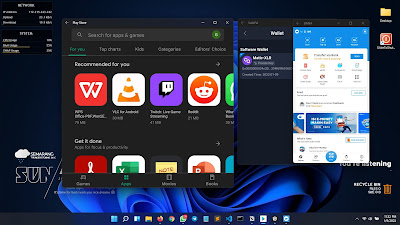 How to Install Windows Subsystem for Android WSA on Windows 11

What function? so that your win 11 has the playstore and can install various kinds of apk, so it’s more integrated with windows (without emulator)

This is similar to the Windows Subsystem for Linux that Microsoft introduced a few months ago. The Windows subsystem for Android is only available for US users, as the Amazon Appstore is not available in most other regions.

Even if you cross the line, you’ll need to have a US-based Amazon account and opt for the Windows Insider Beta channel to get this feature. Also, you have to install Windows 11 operating system on supported hardware. You cannot test it on Windows 11 installed on unsupported hardware.