As a background, I have a bachelor’s degree in informatics at UIN Suka Jogja. During college, there is an exchange & conference abroad experience. Graduated in January, immediately looking for scholarships.

GKS is a S1-S3 scholarship from the Korean government (administered by NIIED) for students from other countries. S2 & S3 are usually opened in February-March/April. There are two routes, embassy (send files to the Korean embassy in JKT) and UNIV (send files to a destination university in Korea). 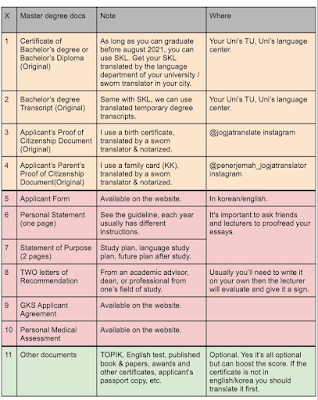 Btw, Indonesia is one of the countries with the most quotas. GKS also does not require work experience, so it is safe for fresh graduates. The benefits include studying Korean for a year, pocket money of 1 million won per month, round trip flights, insurance, and tuition & research.

Language proficiency certificate is not mandatory, but to be safe I took the IELTS test first and thank God I got a score of 7. Documents that are required are Diplomas & transcripts (I use SKL & temporary transcripts), proof of citizenship (birth certificate), proof of parent citizenship ( KK).

All mandatory documents must be translated into English/Korean by a sworn translator, except for diplomas & transcripts which can be translated by Univ. Last year I only notarized photocopies of these documents, but starting this year, it is reported that they have to be apostilled to the embassy.

For essays that need to be written, there are personal statements, study plans, and recommendations from lecturers (you usually write them yourself). The format is different every year. This is last year’s: 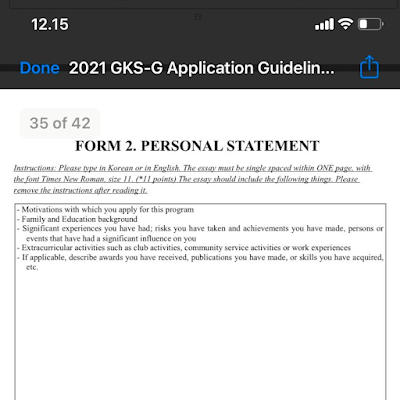 Initially, I applied through the embassy but was rejected. There were 1,414 applicants and only 41 advanced to the interview stage. Immediately, I changed the essay a little so that it was suitable for registering through the Univ route. I sent the document to Pusan ​​National University via EMS Post and it cost around 600 thousand (4 days to arrive).

About 2 weeks after the document was received, I was notified of an interview schedule with the professor. The interview was via zoom with 2 professors. It takes only 10 minutes. There, they were asked about their research experiences during college, why they were interested, and so on (forget it haha).

Tbh a bit hopeless because the interview was that fast, but 2 weeks after that I was notified that I passed and my documents were sent to NIIED for re-selection. NIIED will choose based on our essays & documents compared to applicants from various countries, just pray.

After passing that round, it was actually safe. Unless the medical test shows drugs, etc., or resigns, 99% can leave. Health and TB tests can be done at selected hospitals on the Korean MOFA website. In Jogja, I chose Sardjito Hospital (around 400 thousand).

Due to corona, there are many dramas about going to Korea. At first it couldn’t, then it was postponed, finally leaving in late August even though with several rounds of departures. We are also lucky because only official scholarships from the Korean government can go.

My advice, just list. If you register, your chance of being accepted has increased by 50%. Scholarships are also suitable, those who are accepted do not have to be the smartest. The important thing is to wholeheartedly prepare an essay and prove that we are worthy and able to be accepted.

Don’t forget to ask your friends/brothers/lecturers for help to proofread our writing (this is very important). Spend time on the essay. Find out the experiences and suggestions of other scholars can also be very helpful. Registration doesn’t take long, so prepare from now on.

Soon many scholarships will be opened, including GKS (February). If you are a partner, you will definitely not go anywhere (as long as you register). Good luck!