How to Get Free PrEP at the Health Center – I’m trying to explain this as best I can because I’m not a doctor, etc. I’ll explain as short as I know. If there is something wrong, just correct it or want to add it too. You’re both learning, sorry if the article isn’t neat. Here we go

Let’s start with the introduction, don’t know it, don’t love it, I love being hosted

This is called PrEP (pre-exposure prophylaxis) known as a drug that can prevent HIV (human immunodeficiency virus).

So the use of the prep is to prevent HIV disease with some notes that it is not 100% protective. Then how do you get it. How to use it. The effect. Price. And for anyone who can get it

Kiddo you take prep, you are HIV positive? Maybe this is the most asked and dm too. Thank God I’m still negative and hopefully always negative. Amen. So use PREP for those who are HIV negative and its function is to prevent being exposed to HIV. But don’t be happy just yet….

Prep only prevents not cure. And PREP prevents only the 90-92% range according to studies. Cmiiw. Huh? What’s effective then? Currently, the only and most effective is CONDOMS in the range of 90-95%, don’t you have 100% effective ones? There’s one, isn’t it right?

Why do you only use prep now? Okay, because prep has just entered Indonesia, it seems. There used to be but it’s still a great step. Or not, usually I leave it on the LN and the price is quite expensive, there are 2 million to 30 million. In Indonesia, relatively now, there are those for 600k to 1 million it seems

Do nothing free? Oh calm there’s a BESTIEEEEE

PREP CAN BE ACCESSED WITHOUT PAYING aka FREE TIS TIS TIS….

Terms and conditions apply, or does the price increase on Monday?🙃

So the main requirements for getting prep are as follows. PrEP is recommended for people who have a high risk of getting HIV (such as MSM, FSW, waria, partners with HIV without ARV or low ARV adherence) who always do not use condoms when having sexual intercourse with partners

How to Get Free PrEP at the Health Center

1. How to register can be through http://app.prepid.org/questionnaire. 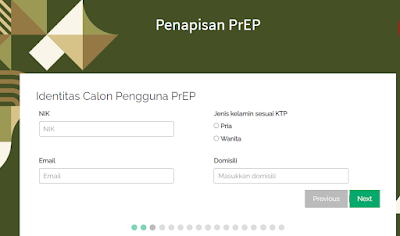 *Anyway, fill in your personal data and answer all questions to be honest then and select the destination date and health facility.

2. Later there will be a list of Puskesmas that provide PrEP (not all puskesmas do).

4. come to the puskesmas at 8 am, take the queue to register, prepare fc. Ktp 3 lbr, later asked also no. bpjs card.

5. Continue to be directed to the love polyclinic, ask the doctor about the ml activity, if it’s ok, he will be referred to the lab at the puskesmas for testing for HIV, syphilis and kidney function.

6. Take a queue at the lab at the puskesmas, the officer will take the blood later, at 1 pm the results will be, then they will be taken back to the love polyclinic, then the doctor will explain how to use it and give a prescription for PrEP.

If the lab results are non-reactive, they will continue to get PreP drugs by explaining to the doctor how to use it and the side effects. the doctor said he lost at the age of 30+ and there is a history of diabetes, the blood will be tested first so it doesn’t interfere with kidney function

7. Then the prescription is taken to the puskesmas pharmacy and after that it can be drunk immediately.

8. Try to come early so that there are not too many queues and can finish the same day. If you come in the afternoon, you have to come again the next day.

10. Later, the doctor will schedule a follow-up check-up by the doctor, and at the time of the check-up, there will be no need for a blood test and the doctor will prescribe 2 bottles of PrEP (according to the doctor).

For other areas in the Health Center:

For other areas in the Puskesmas:

1. PKBI rose clinic in the city of bdg

1. Puskesmas Kuta I and II Badung

Lastly, PrEP can indeed reduce the risk of HIV transmission but not 100%, and it cannot protect against infection with syphilis, warts, chlamydia, gonorrhea, so keep using condoms.

How to Take PrEP

Btw, there are 2 ways to drink it: 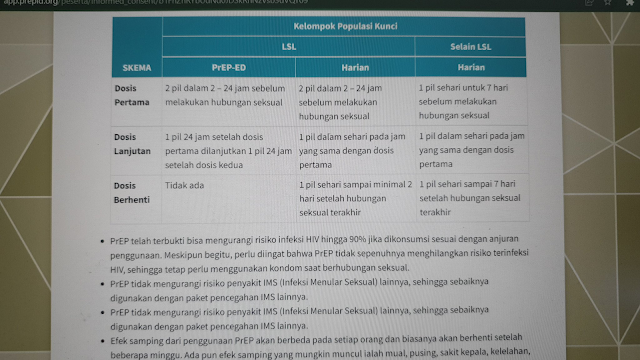 Take 2 capsules first, then take 1 every day at the same time.

The use of PreP is also monitored by the health worker, later on another visit (a month, because 30 tablets per day 1 tablet) to take the drug again, they will be asked about side effects and what they feel after taking PreP.

I’m an MSM at the moment, and I’m very health conscious, from the start I really wanted to access prep, but the information was still limited and the price was expensive. Now that’s not the case.

Sorry, I mean NGOs, finally I was given access to submit prep, because before I met my boyfriend. The intensity of my sex is very high and always changes. Love the taste of the kids 😂

But I really like using condoms because they have been educated about HIV and AIDS and STDs.

After being approved, I finally went to the puskesmas that I had registered, after registering the process was quite fast and I swear the service when I was at the poly was really humble, like chatting with an old friend. What’s the role of the director who smells like personal? Where do you know this info from, when was the last time you had sex? And use a condom

After the process is complete, finally a blood test. Complete blood check starting from checking kidney function, definitely HIV, STD, hepatitis (if it’s not correct) there are 5 or 6 components, if all are healthy, yeah, you managed to get the prep on the same day

After being approved, we are told how to use PREP so that the medicine is effective to prevent it. The following table shows how to use PREP. We consume PREP-ED when we have scheduled sex, while for the daily we use unscheduled sex or we can say we don’t necessarily have sex when.

Let me understand better, let me give an example, because I already have a boyfriend, *ah, ela new bride. so this time we have a schedule because we love each other more to prevent. Learn not to be shy anymore to say “the one who fucks on Thursday night”

If it really happens, then the desired thing happens

What is done is that the drug is taken as quickly as 2 pills before 2 hours of the desired event and no later than 24 hours. After 24 hours of sex, then just take 1 more pill for the second dose after that 24 hours later take 1 pill for the last dose. And stop not drinking anymore

The medicine is taken again when there is another schedule for having sex. Depends on the intensity of each of you. That’s my case.

But if you use it every day, you automatically take the daily one. Alias ​​every day continue to drink until the drug runs out. The medicine is finished, come back to the health facility when you pick it up

Then if you are already PREP, don’t you need to use a condom?

KEEP USING IT, PREP is just an addition for security, like the word it’s been locked and then locked again to be safe. Because actually condoms are the most effective and safest at this time. Many who use PREP like to say

To be able to access the prep, here’s the link http://app.prepid.org/questionnaire you can search according to the available health centers in your area, I don’t know which are outside JABODETABEK, for those of you who are in Jakarta I suggest PUSKESMAS KOJA OR SENEN, that’s the best service if there is another health center

Maybe you can inform others too. Because I applied at the Koja Health Center and when I told my friends, Koja was the best.

If that’s all the information I’ve given you, it seems that it’s sufficient, if there’s more info, you can just reply, maybe you can answer.

That’s How to Get Free PrEP at the Health Center.