How to determine the right social media persona for brands and institutions – After the BMKG tweeted yesterday, many questions and pros and cons emerged.

Is it appropriate for state agency accounts to post like that? Isn’t it crunchy? What are the limitations of brand and institutional accounts when using social media?

Let’s discuss together. First, let’s go back to the platform name. “SOCIAL MEDIA”.

His name is also SOCIAL, so you have to socialize with other netizens. This media is not a one-way announcement media such as TV, radio and newspapers. Brands must talk like humans (human to human).

This is one of the most frequently used slides for teaching. The relationship between a brand and its audience on social media is a two-way arrow.

Brands are not just selling products, but listening, answering, and discussing with their audience.

In the book Marketing 4.0 (Hermawan Kartajaya & Philip Kotler) it is also explained that in this digital era, customers or audiences want to be on par with the brand (on par).

So the brand should not feel taller, stiffer and only make the audience as a target for promotion/information. 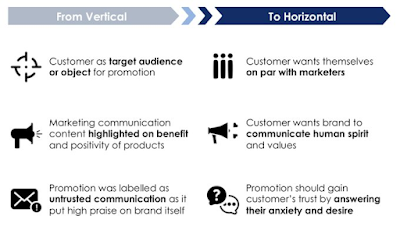 This is also explained in the book Digital and Social Media Marketing: A Results-driven Approach. The key is knowing who we are, knowing who they are, then what channel and how the message will adjust.

It’s the same abroad too.

1. Make messages received better (because they are fun packed)

2. Increase engagement with the audience

5. Free promotion because the message is widely spread free

How do you determine your social media persona? We try with the theory of the Model of Communication from Harold Lasswell.

Who: who are we

Says What: what to say

In Which Channel: through what media

To Whom: Who wants to talk to

With What Effect: to achieve what goal?

We start with “Who”.

Every brand/institution has a brand personality and brand values. This is what is revealed to be a character on social media with its limitations.

After knowing ourselves, we come to know who we can be personified like? Dian Sastro? Dodit Mulyanto?

Try to find a popular character that we want to “cheat” his character. We agree that all digital teams, if you want to make a caption, follow the character.

In the case of @infoBMKG, they have started to raise young people (want to be seen as young) and respond to the Forecasting Love and Weather series which in the film discusses the Korean BMKG. So it is very relevant for BMKG Indonesia.

Next up is Says What.

The @DitjenPajakRI account consistently wants to invite people to pay taxes. The method is a bit unique.

The @KemenPU account is consistent with stories about the intricacies of infrastructure development.

The way to convey it is packaged in the context of Forecasting Love and Weather which happens to be trending.

After “Says What” there is “In Which Channel”. If @infoBMKG broadcasts on TVRI, it’s definitely not possible to use bestie-bestie dong. Now, this is the channel on Twitter, definitely adapting to Twitter culture.

Moving to other social media like FB for example, you can’t use the same treatment anymore.

“Channel” also relates to “To Whom” or as we call our audience. If you want to talk to young people, the approach must be in line with their style.

You know, but on Twitter it’s not just young people? We can have multiple segmentation.

For example, today we talked about drakor while joking like a young child.

The next day he explained the weather forecast and how to care for the house in the rainy season for young adults.

Tomorrow is another serious extreme weather announcement for everyone. All segments so get a share.

Lastly, is “With What Effect”. The goal is as discussed above. The engagement got better and went viral.

Why did it go viral? There is emotion because of the contrast between “BMKG” which seems old school and the style of discussion and current topics in the post. So it’s crowded.

The question is, do all brands have to be that social? Back again to the points above. It doesn’t have to get to 10 points “very slang”. It could be a forced fall. Just 3 points, “a bit flexible and not stiff”.

“Sir, my boss doesn’t approve of being so slang.”

Change cannot be radical, but neither can we if we don’t change.

Try a persona that fits and is agreed upon by all stakeholders.

We show case studies of many brands that have done this and their performance.

Thus the article about this long social media persona. Hopefully it will be useful for friends who manage their respective social media brands. Come on let’s go.