It all started with anxiety, I saw more and more so called “affiliators” who advertise useless laptops with cheap gaming frills which have the potential to be misleading especially for ordinary people, without fafifuwasweswos I want to tell you how to choose the right laptop

For those of you who are just looking for a laptop, if you have a lot of budget, it’s easy, just open tokped, look for the most reviews, buy a core i7 gen 12 using iris xe graphics, that’s fine, the rest is eye candy.

Now, what’s confused is that if the budget is borne, right, buy a new one, get potato specs, buy secondhand, check out the clickbait tweets

So, for those of you who are on a budget, I have the simplest and fastest formula

Budget 1-2 million: just take a chromebook already, buy a laptop not just specs but also have to look at the age.. it’s called an electronic item when it’s old it’s prone to damage.. but in some cases sometimes you get a core i3 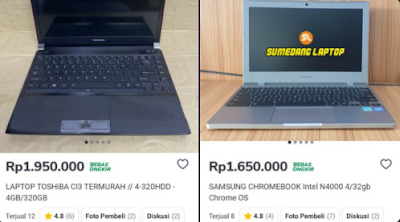 Continue with 2-3 budgets: don’t ever want to be offered laptops that use Core-i generation 1, it’s better if Celeron goes anywhere, I swear… it’s definitely cheaper, it’s also younger, Core i gen 1 is released in 2010. Are you sure you want a laptop that’s already available? 1 more decade? Its a recipe for disaster

Next, in that budget, you should be able to get laptops using Intel Haswell or Broadwell (gen 4/5) take an i3 it’s okay, thank you for getting an i5 (with turbo boost) usually in this range you get a U series processor (if it’s still safe for days) how come)

Continue with the 4-5 million budget: if it’s starting to feel good on this budget, you can get Intel Skylake or Kaby (gen 6/7) especially at this price, usually, ex-office laptops are still fresh… or you can also go down to gen 4/5 but got pretty good specs like ssd, i7 quad core, dual vga. 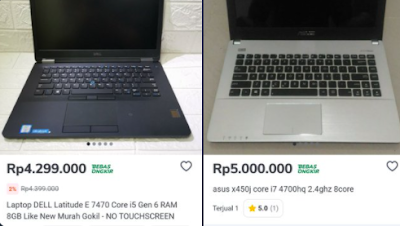 Continue at 6-7 million: now it’s starting to reach the limit, the specs for a new laptop are pretty good, if you take a second hand, you can usually get one with decent specs, but if you have a budget like this, everyone’s preference is to buy new or used, usually you can get Intel Gen 8 used. or new ryzen 3 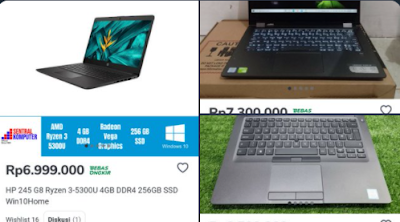 It’s more than the budget above, I should have bought a new one, no problem, on average I already got an i3 plus ssd with FHD screen, it’s good for daily use, but if anyone wants to recommend, please reply

Notes++: I want to make a list of laptops that I recommend buying if you are lazy to read long

How to buy a laptop so that it doesn’t mess up but gets a cheap one?

I used tokped as an example, which has a good filter system

Open tokped, write laptop in the search field, open the filter menu, enter the price range according to your budget, turn on the used filter, sort from lowest

So, after that, just read the guideline that I made for you, at least what do you get in that budget, the one above from my guide is good, if you get it below, don’t go too far, for example in the guide I get gen 4 but you get gen 3 but it’s already ssd, so you can consider if it’s like that

Run away if the laptop uses AMD A4, what gen do you want, just gtfo, that’s procie, masyaAllah, it’s really sad, ah with celeron, it’s better if celeron is better, using ssd won’t help with the processor, its just that trashy

Also run away if you’re still using Intel Gen 1, it might sound like a hater, but the processor is really old, it’s still the same age as Core2Duo and its performance can’t be said to be good even though it’s an i7, and the thermals are pretty bad

I do recommend an ssd on a laptop, so if the budget is sufficient to get an ssd, look for one that uses an ssd, or save a little money for upgrading to ssd, if you still get it using an hdd, thank goodness there is an extra budget for upgrading ram, I recommend it at least 4gb sad, 8gb is good-ish

Double vga doesn’t guarantee you can ‘gaming’ on a laptop, most of the time dedicated gpu performance is also not that far from the default gpu, except when talking about vga gtx or radeon r7 and above huh

It’s pretentious if anyone wants to add or correct or want to share with friends who are confused about looking for a laptop, I’m also really confused and a bit annoyed when I see affiliate tweets tai amjinc

Oh yes, it’s all about the letters behind the processor

M = mobile (can still be unplugged without soldering to the mobo)

How about procie amd? what I recommend from amd is that pre-ryzen only starts from amd A8, the performance is more or less equivalent to core i3, A10 and FX is equivalent to i5

If anyone is confused, why is there a seller who says the laptop has 8 cores even though the processor has a Q tail (quad core), it actually only has 4 physical cores, right, 8 are virtual cores (threads).

Dual core doesn’t mean trash, 4 core doesn’t mean fast, a lot of Intel Atom and Celeron have 4 physical cores, but if they’re pitted against i3 they cry, because the instructions per clock are different classes, but it’s a long discussion later

How to Choose a Good Processor Without Fooling Ads