How to Buy NFT Digital Photocard in HYBE Market – What is NFT and what if photocards are sold in NFT form? I try to explain my understanding using baby language

Notes: Most of the info I get is in English, I’ll try to translate it and include the source at the end.

First about HYBE which will officially announce its entry into the NFT market with a long term partnership with Dunamu. 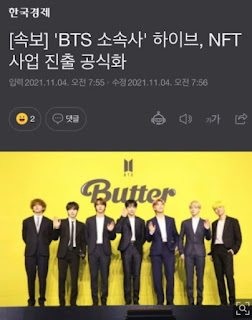 There are terms that are actually unfamiliar to me. First listed, right? Will explain one by one

For example, fungible = 20k money is converted into 4 5k bills. Mutually interchangeable with the same value.

Example of non-fungible = land certificate. Can be transferred, but the price will change.

NFTs (non-fungible tokens) are digital assets that link ownership to digital items, such as artwork, real estate, music, or videos. NFT can be considered a modern collection.

So why is this a bad idea? The point is, you just buy digital/virtual items and don’t actually receive the items, the items you “buy” don’t really belong to you because they can still be sold again.

Another reason, NFT is not environmentally friendly. Why? They need a lot of energy because they depend on the blockchain. This blockchain requires HUGE energy.

Simply put, the NFT that will be sold by HYBE is the same as a PC stored on your cellphone, but they use blockchain technology for transactions and store digital item data.

Baby language or analogy why NFT is not environmentally friendly

For example, you see the Mona Lisa, and you want to buy it, then the seller says “Give me 65 million dollars and I will burn the Amazon forest for an unspecified amount”

and you got the mona lisa purchase receipt earlier. Did you get the Mona Lisa? NS. The Mona Lisa will remain in the museum. Only your name will be kept in the museum cupboard.

Then you ask, “Can I take the Mona Lisa home, or not?”

“Oh yeah, that’s okay! Mona Lisa doesn’t belong to you” Mona Lisa will remain a museum, not going anywhere because basically no one has ownership of Mona Lisa.

Actually I’m still confused about this NFT thinggy myself, but from the sources I read, I don’t think this is a good idea and not environmentally friendly

Baby language : Collectible items in digital form which are stored digitally too (cmiiw)

Blockchain technology is an information recording system. Blockchain is basically a ledger of digital transactions that are duplicated and distributed across a network of computer systems.

Well, it was previously mentioned that HYBE will publish NFT with their assets, HYBE artists. So what does NFT have to do with the environment?

Go to another example, let the concept seep into the pores.

bts albums. 2 billion people have the same album. Each person spends $40-$50 depending on where to buy.

your house. Your parents spent $1000 and only one name owns the land

Then, what is a Token in NFT? The token is a sign of ownership. So in short, this NFT is proprietary with a unique code that is traded exclusively.

If this is like real estate, you have the land certificate but the building is in a computer

What can NFT do? Everything is possible, as long as there is demand. You can also upload photos of Kocheng, if you are sure that the market exists. Because to be able to upload and monetize “art” in crypto, you have to pay a certain amount of money for a fee or service fee.

Loh, what’s the difference with digital art or stock photos?

The digital art/stock photo is the same as the BTS album earlier. As long as you spend a few rupiahs, yes, you can buy it. Anyone can have.

As for NFT works, ownership is exclusive to one person.

Let’s say Hybe releases NFT Namjoon pc. Because this crypto art is a free market, a market that sets prices. For example, I’m Elon Musk’s son & I want to buy Namjoon’s NFT for $60 trillion, that’s fine. Hybe got that much money & I was registered as the only owner of that Namjoon online PC

Oh I want jungkook’s pc too!! can i trade with namjoon pc? Certainly not. Yes, I bought the ownership again. I bargained with the price of $ 100 but it turns out there is a son of an oil tycoon who bid $ 300. I lose. He’s the one who got it.

Loh, then where are the PCs? On the Internet. Do I have? Can you save it to a laptop? You can also use the cellphone. It can also be distributed to WA groups. Me, you, him and everyone else can have a copy. But what the world doesn’t know, I am the real token owner

Well then, later on, the Namjoon PC that I have will not be able to resell at the price I like. Who buys? Who is richer than Elon Musk’s son?

And from here, a PC that was initially only $24 might be able to change hands 1000x and become $999. Karl Mark cried seeing this.

Loh, after the NFT pc bts changed hands, how about hybe? Do you lose?

Of course, this crypto art has a copyright system, aka hybe, as copyright holders can put the price they get every time the PC is resell. Passive money at its peak.

NFT is a game changer for a capitalist market, especially for a major art creators and collectors, he said. I don’t understand how good it is to spend money to buy ownership on the internet. Maybe I’m still too poor to relate

But lowkey I feel that eventually, the kpop pc market will penetrate here sooner or later. Hybe just started looking for it.

I want to say that fangirls have been exploited, but they have always been exploited voluntarily. There must always be a demand, so the business is moving in that direction.

For example, yes, free PCs from albums are carried around the market, change hands, change stores, the price can be inhumane. Especially in the crypto market.

Another, real-life example: the CEO of twitter sold his first tweet (jpg below) in NFT and sold for $2.9M 🙂

Even though the tweet is just a screenshot, like me, I already have it. No need to pay $2.9M 🙂

Now, is it a good business? Yes, for the business itself. But for the environment, by all means, my answer is no. Why? Because this crypto market is run with hundreds or even thousands of computers, in many warehouses. It’s a huge energy consuming business.

It’s not the hype that’s running the crypto biz. But they participate in adding users to the platform. Imagine thousands of fans hanging out on the internet to monitor PC prices & make Money with wings transactions

Also imagine how much electricity the blockchain uses to generate the transaction.

I also read that the term “sustainable NFT” already exists now. Maybe the electricity is from solar? How can I not understand. Not too much to find the results of his studies. It’s just that the word “sustainable” has been used too often for greenwash, tricked by business people. I’m tired.

The purpose of this article is simply to explain what NFT is. Hope it helps friends who might be confused when they see TL talking about NFT while getting angry

It’s really cool, Sis, I feel smart with tears of joy, even though there are some things that I don’t understand because they are foreign. Well, knowledge is not just knowing the basics, you have to look for it and keep looking for it so you know a lot of things