IT People Blog – Some of you must have seen or known the CMOS battery used in computers. However, most do not know what the definition, function, type, and price of the computer’s CMOS battery is. Even though this thing is important enough to ensure that time continues to run as it should even when the computer is turned off

Therefore, in this post, I will discuss the understanding of how the CMOS battery works on a computer. So that it can add knowledge about how important the role of the CMOS battery is which is underestimated. 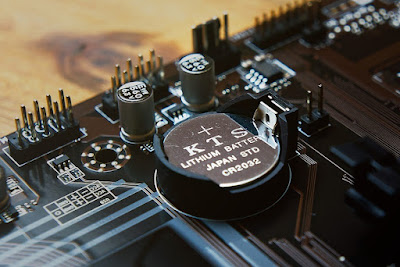 First it starts with understanding what is a CMOS battery in a computer. For those who have never seen a CMOS Battery, it’s actually quite easy. Because this CMOS battery is usually installed on the motherboard and looks pretty clear.

Of course, CMOS has specific characteristics, as follows.

• Has a specific shape round flat like a clock battery.

• The battery is located on the motherboard and can be easily removed. So if there is damage can be immediately replaced with a new one.

• The location of the battery is usually placed separately with the connector.

• It has important characteristics in the form of resistance to high heat temperatures, so it is not easily damaged even though it is used for a long time.

• The next feature and characteristic is that it has a fairly low static energy consumption. This is because the CMOS sensor requires less energy.

Not only understanding the meaning of CMOS, but knowing how the computer’s CMOS battery works is also important. In general, this battery works by storing the BIOS configuration settings given to the computer. Where later this CMOS produces a small electric current when the transistor switches from on to off, and vice versa.

When turning on the computer, the CMOS automatically checks the computer and makes sure the computer is not having problems. These include checking the computer’s RAM calculations, checking disk formats, and viewing array configurations and various other settings. Furthermore, what is also important to understand is what the functions and benefits of the CMOS battery on a computer are like. If traced further, there are indeed several important functions of using this battery. The functions of CMOS include;

The main function of the computer’s CMOS battery is to store settings or configurations in the BIOS. So that all the results of the examination on the computer system will be stored in this battery. CMOS also serves to avoid crashes or boot failure on the computer.

Furthermore, the CMOS battery also has a function to set the time and date on the computer. Either on or off, CMOS determines the date and time according to the settings made by the computer owner.

On the other hand, it seems that the computer’s CMOS battery can also function as a minimalist RAM. Where CMOS is a data storage area with a very small capacity, for example for the purposes of reading components on a computer.

• As a Low Size Computer Battery

CMOS itself is a computer battery with a low power measure. So this helps the computer to have additional power whenever needed. Including storing data temporarily when the computer is not powered.

This battery has a nominal voltage of 3 volts and has a nominal capacity of 210 mAh. This CR2032 series CMOS battery model generally has dimensions of 20 x 3.2 mm and weighs about 3.1 grams.

• This battery has a nominal voltage of 3 volts and a nominal capacity of 40 mAh. This CR1220 series CMOS battery model generally has dimensions of 20 x 12.5 mm and weighs about 0.8 grams.

Problems in CMOS and how to solve them

In general, as with other components of a computer, the CMOS battery can also have problems. If the CMOS battery is removed then indirectly all the configuration information stored in it will be lost. So in the end it is necessary to reconfigure when installing a new CMOS battery.

Therefore, generally the lifespan of this CMOS battery is quite long, it can even touch the figure of almost 5 years. However, if there are signs of damage to the CMOS battery, you should immediately take steps to buy a new one. Because this battery cannot be recharged, you have to replace the battery.

As for replacing the CMOS battery on the computer, it is necessary to purchase a new product. Many people may not understand how much CMOS batteries cost on the market today. Even though the prices offered are generally still affordable by the general public. The average price of a CMOS battery is in the range of Rp. 5,000 – Rp. 10,000 only. Of course it is quite cheap and can be obtained easily in the market.

Although basically the price of a CMOS battery also depends on the type and series, often the prices on the market are not too much different. Therefore, if the CMOS is damaged, there is no need to worry.