IT People Blog – The existence of Robots is now not foreign to humans. In some developed countries, even robots are used to help human daily activities. If we look on the internet, there will be many cool robot names created to help humans.

Usually these cool robots are created and made in developed countries like Japan. Even in Japan and several other countries, robots have replaced human tasks. The use of robots in restaurants and other public service places is common.

Use of Robot Workers in Daily Life

When we look for information about the use of robots in everyday life, for example, we will find a lot of information. Robots have been designed in such a way to assist humans in carrying out tasks.

There is even a cool robot design that is made like humans with various facial expressions. The robot is usually used for therapeutic purposes in clinics or other therapy centers. In addition, there is also the use of robots to serve visitors in the restaurant.

The robot is in charge of receiving orders and delivering orders to the buyer’s table. There is much more information about future advanced robots that we can easily find and will certainly make anyone amazed at the sophistication of the robot.

Recently there have also been two interesting discoveries about robots that will amaze us. In a week there are two cool robots created to help human activities. Even one of them is a robot made by the nation’s children. In order not to miss the info, let’s look at the following information;

Korea has always presented a trend that is able to amaze. Not long ago, Korea created a new influencer robot named Rozy. This Rozy has a beautiful face with a beautiful body. Rozy has many expressions when photographed.

At first glance, Rozy’s appearance is very similar to humans. Rozy is also quite fashionable with a human-like identity, which is 22 years old and likes traveling and yoga. Rozy is the first robot influencer.

There are at least 800 expressions that can be displayed by Rozy with various styles. Although it has appeared since 2020, Rozy’s fans continue to appear to this day. Rozy is recorded to have more than 88 thousand followers with abundant endorsements.

Rozy’s income in a year is estimated at 12 billion rupiah. Rozy is rumored to be playing in dramas and tv series soon. News about Rozy continues to rise and is popular to this day. Besides Rozy, the presence of the following two robots is also quite horrendous. In one week there were two new robots that were employed by humans.

It was recently reported that the Greek Post office is now starting to hire robots to help with their tasks. ELTA or Hellenic Post began hiring robots made in China to sort packages. 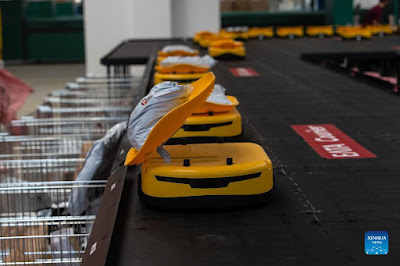 This latest advanced robot is a tiny robot made in China. This yellow robot was employed to assist the Greek Post in sorting the packages sent. There are 55 tiny yellow robots employed at this Greek Post company.

The use of the Pos robot is considered to be very helpful for the work of the Greek Post company. With this robot, sorting can be done easily and with minimal errors. Human error can be reduced by using this robot.

If the Greek Post company employs robots from China, it is different from the tiny robots that we will discuss next. This robot was used and created in Indonesia and had shocked many people after it was uploaded to a Facebook account by someone.

Tiny Robot by the Nation’s Children

Sophisticated robots made in Japan have also been used for various purposes ranging from medical purposes to entertainment. But who would have thought that the Indonesian state was also able to create sophisticated robots that could help human activities?

The development of robotic technology in Indonesia has grown rapidly as evidenced by the many works of the nation’s children who are also popular. Several faculties have also issued new study programs that focus on robotics.

We also often encounter various kinds of robots in robotic exhibitions held in several regions in Indonesia. The best students and scientists will gather to show their work.

Many people are also getting interested in studying robotic technology. Even now available robotic training and courses for children. Even those who do not have the facilities and access to learn robotic technology are also able to create self-taught robots.

Like the drink seller that we will discuss this time. A street drink vendor is able to horrendous and steal the attention of many parties because he succeeded in creating a drink selling robot. If yesterday there was a stir about the existence of a robot barista in Korea who is able to mix their own drinks, Indonesia now also has it.

This robot made by street vendors is not as sophisticated as the Korean barista robot, but it deserves thumbs up. The creativity of these traders is able to attract people’s interest to make their merchandise sell well.

Recently a street vendor was able to create a robot that can mix drinks. The drink seller from Padalarang, West Java is able to build a robot that will help him mix drinks. This cool robot is one of the sophisticated robots made in Indonesia which is quite horrendous.

The reason is, this robot was created by someone who does not have an educational background in the field of robotics. The unique fact is that the drink-making robot uses very simple technology and is made using a used printer.

The creativity of this drink seller invites the admiration of many people. He named his robot ‘Es Robot’. Although simple, this robot has a sophistication that makes many people interested.

Using a small blender, this robot is able to make and mix ice quickly. The way this robot works is also quite unique. The packaged powder drink is placed in a glass and ice cubes are added.

The glasses are placed on the right and left of the robot. The robot is also installed a hose that will release water later. The hose will stop at one of the glasses and fill it with water.