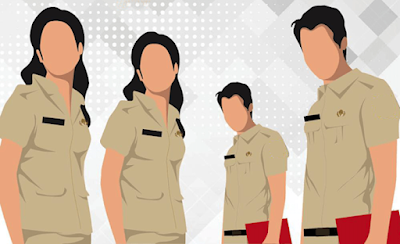 a. Can’t pass SKD and SKB

We all know how transparent the CPNS selection is, we do 100 questions, when we click the submit button, a count of 3 seconds, the score immediately appears, we walk to the exit for 50 seconds, our scores and competitors are posted on the announcement board. From here we can find out whether we pass the CPNS test or not because the scores that appear on the board will not change when the announcement of the final CPNS selection is announced.

If you have failed to pass the CPNS selection even though you have sacrificed time, energy, money, thoughts, some people may feel traumatized

b. Fueled by the media

Often the news media exaggerate the salaries of civil servants, for example, “the pension benefits for civil servants are almost 1M”, or “PNS get additional benefits, see the date of disbursement” while readers are annoyed because their salaries are mediocre.

In fact, every month fills in performance, whatever is done every day and the results are uploaded for assessment of performance achievements. But because a civil servant (Community Servant) is required to always look clean and tidy so other people see it as casual work > clean clothes > paid every month

Basic salary plus TPP every month, every 2 years periodically, 4 years as a class increase, sometimes when it’s time to get allowances (holidays, New Years) the news is touted

They pass the general intelligence and field ability tests, they often mingle with the community so that some people stutter and feel annoyed because they have lost an argument with civil servants.

All you have to do is enter the CPNS SK to the bank, you can get 75 million, you can get 150 million using a PNS SK.

One of the rights of a civil servant is to be prioritized in public services, they have a private doctor, treatment room class when sick is level 1 or 2, legal guarantees in the form of a companion lawyer when involved in legal cases and so on.

h. Position is obtained from the results of licking

As civil servants, they are subject to a merit system in the form of rolling positions every 2-3 years, there are promotions and job transfers. People assume that promotions can be obtained from the results of fawning but it is not that easy. Promotions are only given to those who have achieved good performance over the past few years

This may be the opinion of an intern. Coincidentally, the bureaucratic atmosphere in the apprentice’s place is very thick with seniority or it may be divided into several blocks, some of which are hedonistic, sycophantic and feel the most powerful.

Even though each agency has a work culture that is not the same so don’t beat it flat, for example at my place, Alhamdulillah, the people are good.

j. The salary is the result of corruption

Civil servants get a basic salary, allowances and intensive TPP, as far as I know, civil servants are now clean because everything is completely transparent. Every budget that comes out there must be SPJ files starting from orders, minutes of handover, details, partners, proof of spending, not just nonsense then liquid money.. the flow is also long, you have to go through SP2D > SPM > disbursement

It is undeniable that there are some civil servants who display a bad image with their distinctive uniforms, for example dancing on tiktok, wearing a full badge but not wearing a helmet or speeding, talking dirty or maybe other mistakes due to lack of knowledge when serving the community.

Once again, these are just individuals, because in the eyes of CPNS training until they are appointed as civil servants, it is always emphasized that civil servants are public servants, taught public ethics, norms and decency.

Because some civil servants are allocated official vehicles (cars), it may be coincidental that the civil servant’s child often shows off to his friends so that he is hated and the target of hatred is not only directed at the child but also to his parents until his job.

It’s normal for children of today’s tiktok generation, to ride in their father’s official car, they are mostly stylish as if their own car

When we talk about the ineffectiveness of our work, I agree that we compare government agencies with private companies in terms of using technology more efficiently in the private sector.

Indeed, there are some seniority attitudes in the work culture both in government agencies and stakeholders, fortunately I have good superiors who pamper their subordinates and are willing to accept all opinions

Some say that civil servants are stagnant and difficult to develop, even though it depends on the individual too.. One of the rights of civil servants is to develop their abilities through training at least 20JP/year, there are many technical, position and other trainings that can be followed.

Everything comes back to you..

In managing files, for example, there must be a cover letter from the RT RW, stamp duty, a certificate from the village and so on. Due to lack of insight or indeed bad service (for example, the village stamp was lost or the village head was in DL so that the writing of the letter could not be completed on that day), because the file was incomplete, finally our application was not served, so that can also make us annoyed with civil servants.

Their work system is rigid, don’t equate them with private employees at a motorbike shop, for example, where the ID card document is enough to take a photo or is more flexible in serving (sales come to the house)

The benefits for civil servants are quite a lot, there are salaries of 13, 14, retirees, certification, mortgages for Bapetarum and so on. Even though the value is equivalent to the basic salary hehe

r. There are civil servants wandering around during working hours

There must be some, at work, go to the mall to look at clothes or have coffee in a typical shop with a keki uniform, but not everywhere like that..

The public is even more critical, with the photo capital of the cellphone camera then reporting it is enough to make the civil servant concerned get sanctioned. You can be critical to improve the morals of some civil servants who are deemed inappropriate

It’s no longer a strange thing that a civil servant can abuse the position given to markup projects, official trips, brokers in managing document files such as birth certificates, death certificates, family cards, ID cards, certificates and so on.

The impact of technological advances makes some people confused when taking care of document files at the Civil Registration Administration, considering it is convoluted even though everything is quite easy, all you have to do is download and upload all the requested files online, then the requested documents will be sent via the applicant’s cellphone number to be printed personally, but some people common people think this is difficult and there is brokering

Maybe because the socialization of public services is not evenly distributed in the community, especially those who are still new to the development of digital technology

t. Always used as a benchmark

During the current pandemic, there are many pressures from economists so that THR payments for civil servants are immediately carried out in full without reducing the intensity in order to encourage economic recovery during the recession due to Covid-19. It is as if their rights are being defended by various experts while the rights of other people such as farmers whose feed prices are expensive or farmers who find it difficult to buy fertilizers are often ignored.

u. Government plans that are not accepted by the community

People see that the salaries of civil servants and their allowances are quite high, but some civil servants at work still look quite relaxed, for example, when processing documents manually at the adminduk, say the officer at 12 noon, the permission to take a short break turns out to be coffee in the canteen until 13.30

Or maybe civil servants are caught playing games or karaoke in the office even though it is working hours, people hope that the performance of civil servants can continue to improve and work like horses considering the high salaries and benefits

Maybe you have a civil servant friend who posts a status containing hate speech, hoaxes or taboo things even though you know that the content violates disciplinary rules. Through the PKK (Employee Guidance Officer) in charge of supervising the behavior of civil servants in their environment, they carry out coaching including loyalty, integrity and upholding the 4 pillars of nationality (UUD 1945, Bhineka Tunggal Ika, NKRI and Pancasila)

Moreover, if PNS posts are related to radicalism, they can be severely punished, especially for actions that lead to an invitation to hate the 4 basic pillars of nationality, namely Pancasila, the 1945 Constitution, Bhineka Tunggal Ika and the Unitary State of the Republic of Indonesia.

x. No intention to work

Becoming a civil servant because of a fad to register, finally did not intend to work, there are also people like this..

Feeling that work as a civil servant is not in accordance with passion but is hesitant to decide to resign because looking for a job is still difficult, finally the performance ethic of the civil servant is very low. This can be seen from the behavior of civil servants who may not master their job duties

y. Less able to blend in the community

Civil servants are of various kinds, there are those who focus on their positions as data managers who only work behind a computer all day and are suddenly transferred to the Kelurahan, dealing with the community must be traumatizing, especially if the environment where they live rarely socializes, wrong behavior can become a byword

For example, when distributing wage subsidy assistance to RT RW, it turns out that there is an RW who does not get BSU, of course they will protest.. well for those who are not used to handling complaints face to face, they can be awkward and eventually cause a commotion

Well.. that’s some of the reasons that make some people hate civil servants