Welcome to IT People Blog. The use of the Pay Later payment method is often used by the poor when finances are in critical condition at the end of each month to buy important and emergency needs, although slowly experiencing a shift in priorities where pay later is used to pay for small changes such as credit, data packages, coffee, croissants, snacks. until the current headset that trivially says “.. must be paid at the beginning of the month’s payday ..” 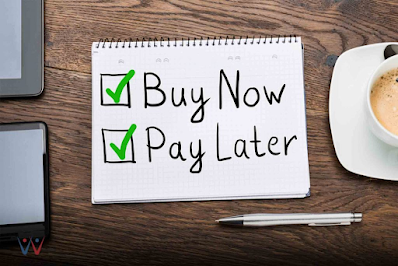 Most people use the Pay later payment method as an option to replace payment via credit card because it is considered simpler, the rest is to fulfill the desire to be able to buy goods even though the payment is in installments, and there are also those who deliberately use Pay Later to repay the product they want to have but are still having problems. financial

The following are a series of advantages using Pay Later;

The increasing use of pay later as a payment method is certainly not without reasons, one of which is because pay later can be directly used to pay for a number of goods without having to bother transferring money or filling out the balance first. Pay Later provides a payment credit limit that can be used to pay for a number of purchases in e-commerce, of course, Pay Later users must determine their own tenor and enter a PIN to be successful in the payment method

To use pay later, users don’t have to bother coming to the bank or submitting a number of guarantees in order to enjoy the pay later features, because all the application processes to meet the usage requirements are done online by sending a number of data in digital form.

It’s like a photo of your ID card, family card and selfie then waiting for a matter of minutes until your identity is verified and you can use pay later. So, now anyone can use pay later only by fulfilling easy requirements and a fast process

As a new pay later user, you will get a usage limit that is not too big at first but is enough to buy basic necessities at a relatively cheap price. After you pay off the pay later bill a few times, your account limit will slowly increase and you can buy items that are quite expensive

The use of credit cards used to be very popular because payments can be made in installments, so when Pay Later carries the concept of paying off the same payment, it’s no wonder that this payment method immediately booms and is favored.

5. There are many promos

To attract the attention of users, Pay Later offers various attractive promos such as free shipping, automatic top-ups, and cashbacks, up to direct discounts

Pay Later offers many conveniences and other interesting features, making it the current favorite online shopping payment method. But don’t be complacent with the convenience of the limit because after all the risk is that if you fail to pay, your good name will be tainted in SILK and maybe the deptcollector can chase after you

Be wise in using pay later so as not to harm yourself and others!

Maybe you already know that the way pay later works is the same as a credit card, the difference is that applying for a credit card is difficult but the requirements to register for pay later are easy. Reporting from Daily Social, based on Fintech Report 2019 data from DSResearch, Pay Later is the third favorite feature with a percentage of 56.7% after investment applications (82.7%), and digital wallets (82.7%).

According to the Research Institute of Socio-Economic Development (RISED) research institute in a survey entitled Market Perception of the Utilization of Pay Later Payment Features, it shows that out of a total of 2 thousand respondents, 95% of them are familiar with Pay Later.

While 82.97% of people use Pay Later only for emergencies where they are short of money to buy their needs. The rest have different reasons, such as buying goods other than monthly expenses, shopping with short-term installments, getting promos, and limiting and managing monthly expenses.

Some people reject the use of Pay Later because it is considered to increase consumptive behavior, increase the burden of debt and worry about the security of personal data. Next will be discussed about the shortcomings of Pay Later;

By having a credit limit, Pay Later users can shop and pay later in installments. This habit leads to consumptive and wasteful behavior

Moreover, Pay Later is very easy to use and the submission requirements are all digital. You can buy some useless stuff even if you don’t have any money. Most Pay Later users do buy useless things until their account limit is exceeded

This extravagant habit encourages consumptive behavior that can build up debt. The longer this debt is piling up so that the salary at the beginning of the month can be used up in an instant to pay the installments. The burden of life becomes heavier without realizing it, especially if you are hit by a disaster until you fail to pay, the peace of life can also be disturbed

3. There is interest on debt and administrative fees

Transactions using Pay Later are definitely subject to interest and a number of administrative fees, the amount of which varies depending on the service provider.

That includes all additional costs outside of debt such as admin fees, warranty fees, transaction fees, current interest, late fees and other administrative costs

It would be better if you buy an item with your own money, you don’t need to panic, you have to pay in monthly installments until you get caught in the interest that is piling up every day.