At the end of 2021, Samsung again released HP products at prices that fit in the pocket. Previously, Samsung often issued cellphones with prices in the upper middle class. However, since the Samsung Galaxy Core was produced, the expectations for Samsung users are getting higher. This has resulted in Samsung paying more attention to the needs of the entry-level segment of users.

Currently the smartphone market is getting hotter with other competitors who offer cheap cellphones with more qualified specifications in their class. This is indeed enough to attract attention from the market. So this year, Samsung is back in producing the Samsung Galaxy A03 Core which is affordable for the lower middle class. 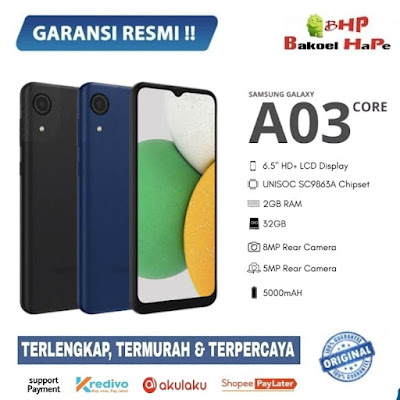 The Samsung Galaxy Core A03 comes with 2 GB RAM and 32 GB ROM variants. This cellphone has a fairly light weight and a simple shape with a size that fits in the pocket. Suitable for those of you who like a simple cellphone and not too big.

The Samsung Galaxy Core A03 is famous for its long-lasting battery capacity. It offers a battery resource of up to 5,000 mAh, although it has a very affordable price for the size of the current smartphone price.

All the features available in the Samsung Galaxy A03 are fairly simple but can reach the daily activities that we do. Before deciding to buy this HP it would be nice to know the advantages and disadvantages.

The advantages of Samsung Galaxy A03 core

Although the Samsung Galaxy A03 Core is priced at a low price, it still uses the Infinity-V screen design which is commonly known as the water drop port. The water drop screen on the Samsung A03 is an improvement on the Galaxy A01 Core which still uses a FullView screen with thick bezels.

That’s why the screen size has also increased, from 5.3 inches on the original A01 Core to 6.5 inches on the Galaxy A03 Core. As for the Samsung A03 Core screen panel, it uses TFT with HD + resolution (720p). It can be said that this is the best cell phone for kids to study at home. Minimal play skills, allowing children to focus more when learning.

Long battery life is the main advantage of this phone. You can count on it for hours on end. So you don’t have to worry about running out of battery on the go. Because Samsung provides it with a 5000mAh battery capacity.

This is a pretty big improvement for the Samsung A03 when compared to the Samsung Galaxy A01 Core which only has a 3,000 mAh battery capacity. At least, in a single charge, this cellphone can last from morning to night, which makes this smartphone comfortable to use.

As for the charging port, it doesn’t offer the most common USB Type-C port available today. The Samsung Galaxy A03 Core comes with a microUSB port that runs on 10W charging.

The design of the Samsung Galaxy A03 Core looks unique because it only has one camera without additional cosmetic lenses.

Just below the camera is a small circle that acts as an LED flash. Not bad for keeping night photos not too dark. The design of this camera mod may be simple enough, but it’s actually good value for what it emphasizes.

How not, the Samsung Galaxy A03 Core actually looks simple and elegant with a diagonal line pattern that gives a visual accent to the camera module.

Samsung only offers one memory variant, 2GB RAM with 32GB internal storage. If the internal storage is lacking, there is still an external storage slot to add a microSD up to 1TB. If only there was more memory available, the performance of this phone would certainly improve.

The reason Samsung only includes 2GB of RAM for this phone is because the Samsung A03 Core uses the Android Go version 11 operating system which is actually lighter than the regular Android 11. This makes the performance of the Samsung A03 Core still stable even though it only has 2 GB of RAM

As mentioned, the phone only comes with 2GB RAM and 32GB storage. If we are still alive in early 2010, maybe this capacity is still sufficient.

With a capacity of 32 GB, you have very limited options, especially when you have to use file storage such as photos and videos to split sections. Fortunately, you can store large files on an external memory card without disturbing the internal memory. The good news is that the device comes with a 3 card slot that supports dual-SIM LTE and a separate microSD slot.

Disadvantages of Samsung Galaxy A03 Core

This phone is also not supported by a fingerprint sensor which has become commonplace in today’s cellphones. Finger scanner sensors have become a necessity. You can rely on the face scanner feature, but it is not completely reliable.

In fact, sometimes face unlock feels more like chancy than fingerprinting. The face unlock feature also keeps you working if you are wearing a mask or face covering.

2.Only Have One Rear Camera

The lack of a camera also makes the photography process less enjoyable and less varied due to the lack of shooting modes.

This smartphone has a rear camera with a resolution of 8 MP (f/2.0) equipped with autofocus and LED flash. This camera is claimed to be capable of recording video in 1080p resolution at 30 FPS. As a cheap phone, of course this phone is not equipped with a gyroscope EIS function to stabilize video recording.

While the front camera of the Samsung Galaxy A03 Core has a resolution of 5 MP with an aperture of f/2.0. Just like the rear camera, the recording resolution supports the same frame rate as 1080p, 30 FPS.

The body dimensions (W x W x D) of the Samsung Galaxy A03 Core are 164.2 x 75.9 x 9.1 mm. Its thickness reaches 9.1 mm. It is included in one of the heaviest weights in the smartphone industry. With a cellphone this thick, you might find it difficult to hold it if it’s too long. Especially if the phone was designed as a gift for children.

Although this phone comes with a separate external memory slot, 32GB of memory is still relatively small. Even with only 2 GB of RAM, users don’t seem to have a good multitasking experience, especially when multiple apps are open at the same time.