IT People Blog – A text editor or code editor is a piece of software that is usually used by developers and programmers whose function is to translate, read, and make it easier for them to write a program, this term is usually referred to as “ngoding”.

Text editors are very important for programmers to compile and create an application, besides that text editors are also commonly used by web developers to build a website.

If you’ve ever heard the word “Notepad” or more fully “Notepad++” then, it’s an example of a code editor available on a computer with a Windows operating system.

Fortunately, there are now various text editors with free licenses or free licenses, which you can use freely. Also usually almost all text editors available on the internet today can be downloaded on any operating system, both on windows and on linux. Well, in this article we will discuss the 7 best text editors that the author recommends for you web developers! 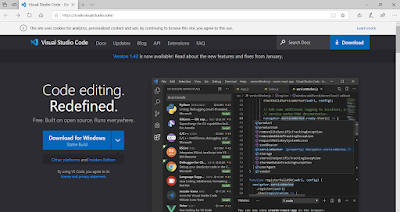 The first text editor that I will recommend is Visual Studio Code or also known as VSCode, which is a text editor created by Microsoft and licensed for free, elegant, and powerful.

In addition, there are lots of additional features by installing several supporting plugins that can make you comfortable to use. To monitor one feature with another, you can take advantage of the keyboard shortcuts that are fully available in Visual Studio Code.

The VSCode Editor also features integration with Git, as well as a debugging feature that can help you check for errors in a line of code. It is very suitable for those of you who are struggling in the programming world.

Please visit the official website of Visual Studio Code at visualstudio.microsoft.com, both free and paid versions are available, support installation on Windows, Linux and Mac OS.

Next there is a text editor called Atom. Atom here is not a bomb type, but an ‘open source’ text editor which means it is also free to use for the public, just like the Visual Studio Code that we discussed earlier. 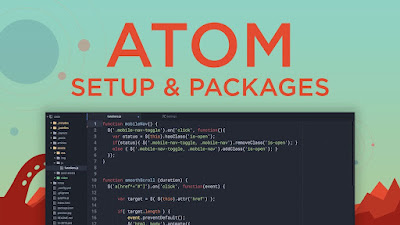 Atom Editor is a desktop application built using web technologies. Just like other desktop applications, this text editor has native menus and dialogs as well as full access to the file system, but Atom Code Editor uses a lot of storage space so it is not suitable for devices with relatively low specifications.

There are a lot of features that are present in this Atom text directory, for example, such as web based, fuzzy finder, fast project-wide, file system browser, TextMate grammars, integration with Node JS, and many other advantages of this text editor. we compare it with some other text editors. 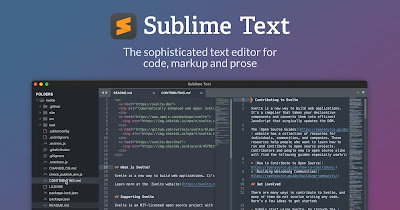 The next recommended text editor is called Sublime Text, which is a multi-platform text editor.

One of the advantages of this Sublime Text text editor is that it looks simple, dynamic, and of course lightweight, aka it doesn’t take up much storage space, so this text editor can run smoothly on devices with even low specifications.

You can use Sublime Text for free but with a time limit. On the other hand, Sublime Text also provides a paid version or a premium version that you can use after making a payment. To get a fully licensed version of this Sublime Text, you have to at least spend about 70 US Dollars.

You can visit the official Sublime Text website at sublimetext.com to get the installation file. 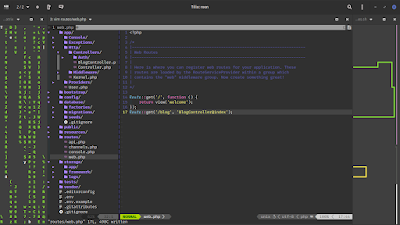 The next text editor that I recommend is Vim, this is one of the most stable editors and until now it continues to develop in order to have good performance and a good impression among its users.

The appearance of Vim that uses the CLI (Command Line Interface) is indeed quite confusing and less friendly to new users. But if we compare this one text editor in terms of speed, Vim is clear there’s no doubt about it.

Vim is one of the best text editors which is very light and of course fast. If you are interested in trying Vim as your text editor, you can download Vim from the official website at vim.org/download.php.

Read also: Advantages of being an android programmer

The last text editor we recommend for web developers is Notepad++. This text editor is a default from the Windows OS which is often used to create txt files or just to write small notes.

There are various features presented by this text editor named Notepad++, including syntax highlighting, auto-save feature, line book marking, and many more. You can also use various plugins to add functionality to this editor.

There is also a view of the structure of the file you are currently opening, making it easier for you by providing information on the position of the file in the work folder. Other features that are quite useful when creating programs include text-shortening, shortcut customization, auto-completion, macro recording, and many more.

If you need a text editor that is light, simple and easy to use, then Notepad++ is the right choice. You can also use Notepad++ for free without costing a penny, great isn’t it?

If you are interested in downloading Notepad++, you can directly visit the official website on the notepad-plus-plus.org page. The next text editor that the author recommends is PHP Storm, this is a Text Editor devoted to the PHP programming language in the field of web development, PHP Storm is a PHP IDE (integrated development environment) made by the JetBrain company.

This PHP Storm editor has been widely used by big companies in the world, you know! We call it like Salesforce and Yahoo. PHP Storm also provides editing features for several popular programming languages, such as HTML, JavaScript and PHP with on-the-fly code analysis, error prevention and automatic refactoring for JavaScript and PHP code.

This text editor software for PHP can be a good choice for you. Especially if you need a PHP editor that supports various PHP frameworks such as Laravel, Symfony, CodeIgniter, Yii, CakePHP and other PHP frameworks.

PHP Storm is recommended for those of you who focus on or work as PHP Developers, you can visit the official PHP Storm website at jetbrains.com/phpstorm.

Then there is the Text Editor Brackets, a text editor specially designed for Web Designers or web design. One of the advantages of Brackets is that it looks clean and modern.

This software has several interesting features, such as highlighting, various shortcuts, and no-distraction mode. There is also a split screen feature to edit multiple documents at once.

Another interesting feature offered by Brackets is Live Preview, where you can directly see the latest CSS/HTML results using the default web browser. The ‘working file’ area can open all files in a single project.

If you are interested in using Brackets? Please visit brackets.io and select the installation file to download according to the operating system you are using.

So, that was information about the 7 Best Text Editors for Web Developers, you can try which one is suitable and according to your needs. Thank you for visiting, hopefully useful and see you in the next article.