IT People Blog – The rapid development of technology in recent years has made the internet a type of network that is known by all levels of society. This is because there are many features and facilities provided by the internet to facilitate human activities.

However, in the midst of the rapid development of the internet, there is a network technology that may still be foreign to the public’s ears. The technology is an intranet. So what is the difference between the internet and an intranet? 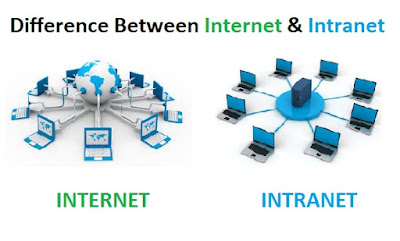 Understanding the Internet and Intranet

At first glance, the difference between the internet and an intranet is only a few letters apart. However, these two types of networks have quite a lot of differences, in terms of their use and function.

In general, the internet is a technology that can connect all computer networks in the world to access and exchange data. In other words, as long as the computer is connected to the internet network, all forms of data access activities available and located around the world can be carried out.

While the intranet is a type of technology that can connect between a computer network that is in a certain area such as home, office, library, and so on.

Difference Between Internet and Intranet

The internet has a very broad reach, covering the whole world. In the sense that everyone around the world can enjoy all forms of data contained in each internet server without any limitations on time and space. This is of course very different from an intranet.

As explained above, the reach of intranet technology can only reach a narrow local area or area. So when someone wants to reach it, then he must have an access.

Developments and Innovations in Internet and Intranet Networks

The difference between the internet and the intranet which then lies in the development of the two networks. Because in internet technology, everyone around the world has a share in pouring their various creations on this network. In other words, developments and innovations in the internet network are growing rapidly.

This is different from the intranet which has a limited coverage area. Its very narrow scope will make any updates and additions of features and content on the intranet run very slowly.

So no matter how good or good the latest features carried by the intranet network are, they will not be able to compete with the developments and innovations that appear on the internet network.

Accessibility of Internet and Intranet Networks

The next difference is in accessibility or the ability to access data on these two networks. As you know that the internet network allows users to freely access all data and content available and stored on each internet server.

This does not apply to intranets. The reason is in terms of accessibility, only certain people who have been given the authority and rights can access data on computers connected to the intranet network.

As for the intranet network, access is very limited and can be done by certain people making the level of security very good. Restrictions on access to the intranet will make it difficult for someone who wants to do illegal access to computer data.

Perhaps this is the reason that makes large companies prefer intranet networks in connecting one computer to another computer within the company’s area.

At least that’s some of the differences between the internet and intranets that you should know, hopefully useful.